There's been something of a rumour or two doing the circuit of late, both concerning operators in my traditional East of England heartland.

With news that Stagecoach's Brian Souter is preparing his balance sheet for a large acquisition that may be 'just round the corner', speculation is mounting as to what business this could be. Clearly, such a giant purchase would probably involve one hell of a large business (and not necessarily a bus company! - c2c & NXEA are to be tendered soon), or could there be a host of smaller acquisitions timetabled to be snapped up at the same time?

Locally, councillors and other trusted folk in the know have suggested that Ben Colson's Norfolk Green could well be in line for a take-over. As with many smaller operators who run in a very rural area, the recession is taking its toll at the same time as local authorities are cutting back on the level of subsidy offered to bus companies. 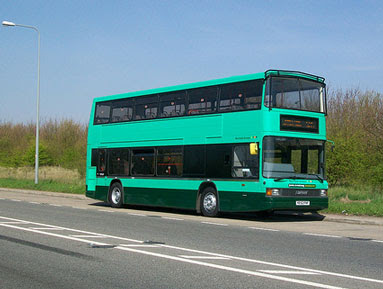 In an interview with EYMS Chairman Peter Shipp (who's also a LEYTR member - Eds), routeone's Mel Holley detailed how, through cuts to reimbursement rates by two local authorities alone, EYMS will receive £1.5 million less this year despite journeys of this type continuing to rise. 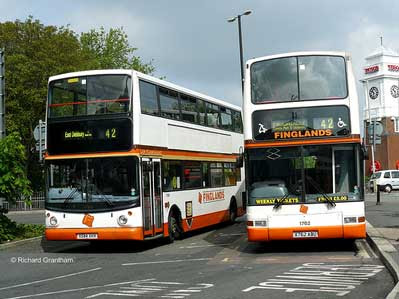 EYMS own two subsidiaries - Whittle's Coaches and Finglands, the latter seen here, firmly anchored in urban bus operations within the metropolis of Manchester. Many operators would gladly purchase EYMS for this urban operation
Then of course there's EYMS itself, with Mr Shipp, the sole share holder, expected to retire soon and with this could signal the scrum for the largest independent bus company in the UK. Souter has often quipped about wanting to get his hands on EYMS - on one occasions bemoaning the fact that some bus company owners will still be running their businesses while strapped to a Bristol VR heading out into the North Sea.

The bubble has burst for Peterborough City Council, whose network of Localink bus services - the majority of which commenced with financial support from the government's Kickstart funding - ceased at the end of last year. PCC used the funding to provide new, meandering and circuitous routes of its own after Stagecoach simplified its network in the city to operate along main roads only, creating great swathes of bus-less population. These new services were never going to operate commercially after 3 years and so faced with finding funding from its own budget to retain them (which is already understood to be £1mil in-the-red), massive cuts are being made. 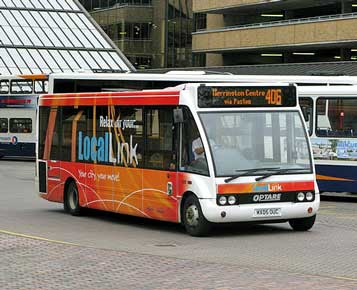 £36k for driving Optare Solos around empty? Sounds alright to me. That's what some PCC drivers have reputedly earned - more than a school teacher, or even that of the manager of a medium-sized bus company
I understand, though, that the Optare Solos used on the routes have been leased on a very long-term basis from Mistral (15 years or something equally eye-watering is a time frame I've heard quoted) and with drivers there now paid well in excess of £1-an-hour more than any other operator in the area, further problems are being faced about how expenditure can be curbed. Such is the manner in which the local authority (whose transport team employs a whopping 35 people - the axe is to fall here, too) has allowed its bus business to grow that it is now seen as being beyond its control and the entire operation is being passed onto the highest bidder later in the year. Whether a final-salary pension scheme and basic hourly rate of £9.92 (x1.5 Sat, x2 Sun) will be retained, remains to be seen.

Back with Souter and could rhetoric still exist between him and NX's West Midlands Travel business? The UK's largest bus company could well be a feather in the Stagecoach cap. Time, as ever will tell whether I've added 2+2 to make 4.

If Souter was to buy a bus manufacturer, perhaps he can get out of tricky contractual obligations. There is speculation that <a HREF="eric-electric.blogspot.com>Optare </a>might be discussing a partial buyout at present, this would fit with Stagecoaches desire to go green...
that would be interesting, but perhaps 2+2 don't equal that...?

Rumour down here (in Eastern England) is that Stephenson's MD Bill Hiron has 'bought into' Norfolk Green. Not sure whether this this in his own right or through a company, as he has many interests, including uno and TGM Group.

I've heard that both Sanders and Norfolk Green are on Go Ahead's shopping list. If so, it would make quite a substantial operating area for the company, who up until the end of last year, had virtually no operations in East Anglia.