Mothering Sunday today, so we thought we'd produce a 'less heavy' entry than those of late. This is courtesy of Annie Mole's Going Underground blog, which we regularly visit for our weekly dose of all-things underground: 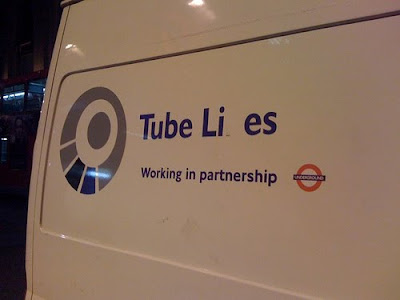 There's 'trouble at mill' in that there shiny London at the moment, over the amount of money the only remaining private company under the PPP scheme claims it needs from TfL in order to complete its contracted work. Initially, Tube Lines claimed it required £6.8 billion, while the arbiter claims £4.46 billion over the next 7 years is a more realistic figure. TfL would very much prefer not to pay anything at all, and Boris - someone whose conservative ideals should be in favour of a PPP scheme - has accused Tube Lines of 'daylight robbery'.

It being Mothering Sunday, I'll give the last word to my mum (whom I've just briefed about the whole debacle): "TfL should be allowed to buy back everything under Tube Lines' control and do it in-house like it probably should have been from the start". No, she's not related to 'Red Ken!'