Cripes! There's been much chatter within the industry about how London's 'frightfully horrid' bendy-buses will find new homes elsewhere in the UK (though not necessarily). The already withdrawn articulated Mercedes-Benz Citaros have been either retained by the operator to whom they were new/last used, or sent to a dealer for onward sale. The remainder due to be withdrawn over the coming years are expected to go either way, too.

I always smile when I see Lombard's advert in the trade press, offering these unique vehicles for sale. Specifically, the manner in which the numbers are shown to be dwindling is what makes me grin. Initially, the dealership had 31 examples for sale and over the past months this has reduced - visibly - to 28, 25 and now 23. The type on offer here is one of the first to hit the streets of the Capital - 02-reg. 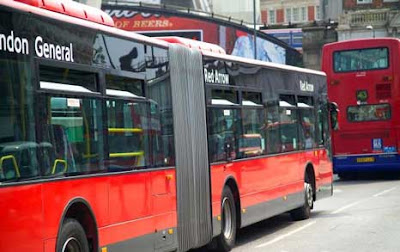 The first bendy-bus routes to lose its Citaros was the Red Arrow services 507 & 521. Ironically, they were replaced with rigid Citaros. It is these (depicted above) that Lombard has for sale
Lombard describes the vehicles as being suitable for park-and-ride services and airport transfer vehicles or any form of fast, high volume passenger services. Can't argue with any of that. As we can quickly deduce, with the numbers of redundant Citaros leaving London at the minute - and over the coming years - there simply are insufficient numbers of park-and-ride schemes or airport transfer services to utilise them. Many artics used at airports are of the same vintage and have done significantly less mileage - why make the backwards step and purchase one that's been flogged to death in London?

Surely detailing the number of vehicles of a type remaining is what you'd do when there are precious few left? Lombard has unwittingly reinforced the view that the Citaros are pretty useless outside London by effectively showing it's sold 8 within a couple of months. That's not even a quarter of its stock.

What's not got mentioned much though is the former double-decker coaches deployed for a half-decade stint on Stagecoach's flagship Oxford Tube service - the Neoplan Skyliners. From memory, all (if not all then as near as dammit) examples returned to the company from whom they were leased from new, and now Dawson Rentals has the unenviable task of finding new homes for them all.

Stagecoach realised early on that these vehicles were ill-suited to the rest of its bus and coach empire in the UK and presumably this was the catalyst for their rental over an outright purchase in 2004. A shrewd move judging by the percentage returned. The vehicle type also took a slump when one toppled over while working National Express duties, though this was later proven to be the fault of the driver.

Dawson Rentals has started to advertise for rental the Neoplan Skyliners, though unlike Lombard hasn't let slip how many have yet to be found a new home. Their ad makes specific reference to the fact that they're 'direct from Oxford/London service' (sic) and the one featured is painted all-over white. One would presume they've undergone extensive technical refurbishment prior to being advertised for lease. They became unreliable in their twilight years at Stagecoach in Oxfordshire - their swansong being non-existent air conditioning, something regular passengers will vouch for, and many came to rest at the summit of the long drag on the M40 to the east of Lewknor, London-bound. 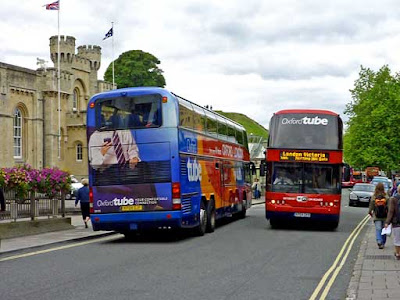 Neoplan Skyliners worked the Oxford Tube for 5 years and were a big improvement from the MAN/Jonckheeres they replaced in 2004. However, latterly they were 'let go' both internally and externally. Air conditioning was poor and promotional vinyls weren't replaced when window glass was, as is evident on the coach to the left
In Dawson Rental's favour, however, is that there are significantly fewer of these than articulated ex London Citaros. Not that Lombard will sell on all of London's fleet. Both the Neoplan Skyliner and Mercedes-Benz Citaro are two very different, high-capacity vehicles and as such ironically offer two very similar onward sale/rental issues.

THe Skyliners were fine. IT was the crap Jonckheere/MANs which preceded them that really struggled up Lewknor hill, and the air-con on them NEVER worked, from new in 1999!

THe Skyliners, if fitted with bus doors, would be ideal for interurban bus work where there was a demand for 86-seaters.

I agree with Noam that the Neoplans were much better than the MANs they replaced, but travelling on them while the Van Hools were being introduced proved what a step down they were and how dilapidated they'd become. Presumably Stagecoach looked at altering their layout to best suit inter-urban work of its own, but for whatever reason, chose to send them back to the dealer.

i agree with NOAM that Sky Liners were good...
Taxi from Pearson airport

Great sharing! It's a new discover of transportation so we should accept this for our good life,environment and other. Beside we can get this cheap rate that's wonderful. If you want to know lombard taxi transportation then see..lombard transportation Lombard Taxi services to and from Midway, O'Hare and the Loop

It really sounds good! Sky Liners are really useful for the passengers between the locations.

I have enjoyed reading this post which has wonderful rainy seasons and also wonderful transportation options available!

Informative post and got some knowledge of Bus transportation. Appreciate the effort for posting a great blog!