While visiting London recently, m'colleague and I took a trip to this seemingly innocuous address in leafy Bayswater. For it is at 23-24 Leinster Gardens that something fascinating is in evidence - though not immediately visible. 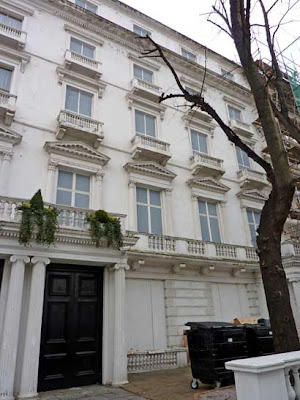 Number 24 Leinster Gardens - looks like an ordinary 6-storey house.... until you head round the back!
Bayswater nestles in the middle of some of London's most affluent neighbourhoods and during the 1860s, the prospect of visible evidence that the Metropolitan Railway had dissected the area in order to lay tracks for the ever-expanding Underground network, would simply not do. To demonstrate that even during the Victorian era, builders took residents' concerns into account, as much as possible was done to hide evidence of the Underground from numerous areas of the city.

At 23-24 Leinster Gardens a fake façade was erected in the space left between two properties in a row of Victorian six-storey terraces, and unless the casual visitor know what he or she is looking for, it is more than plausible to wander past, completely unaware. For the secret is revealed when a visit to the street behind is made and the façade's credentials are revealed. 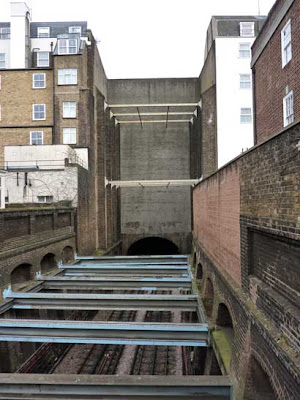 To enable the steam trains of the day to 'vent off', occasional underground sections had gaps to enable the trains' smoke, steam and soot to reach the surface and to conserve air quality. The track can be seen at the bottom of the shot.
For anyone wanting to visit this fascinating structure, it's a 10 minute walk from Marble Arch. Simply head west along Bayswater Road, passing Lancaster Gate before turning right along Leinster Gardens. The houses are situated on the left. The original addresses needed to be demolished in order for essential ventilation, allowing the steam locomotives to 'vent off' at regular intervals along the route. 'Venting off' was required to ensure the underground elements of the network remained relatively free from smoke and soot. 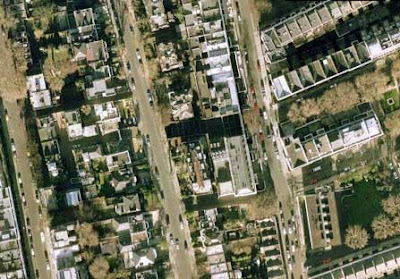 Residents felt a gaping hole in the opulent surroundings would be so detrimental that the façade was constructed. The gap is clearly visible in this shot from high above, dead centre.
Today, the District & Circle Lines operates here and are prevented from being visible thanks to the 5-ft thick fake façade.