Hopes had been high that, following TM Travel's sale to the Wellglade Group, its extensive preserved fleet of buses and coaches would be privately retained. We've learned that the company now plans to dispose of all-but-one of the collection.

The company's operations manager said: "We have decided to offer the whole of the former preserved fleet for sale with the exception of the [1948 Leyland] PS1. If anyone needs further details, please contact me on 0114 263 3893." 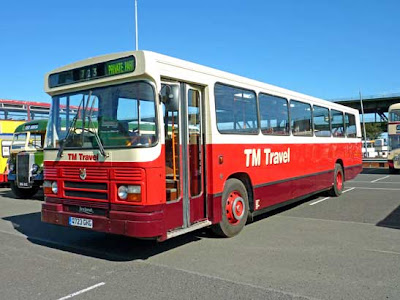 One of the company's preserved fleet is this unique rear-engined Leyland Tiger with ECW body. New to OK Motor Services, this is the only preserved bus to have been purchased from TM Travel, by a former director of OKs.
The vehicles not included in the sale have to be removed from the site from today (31 January) and while localities are believed to have been sought for the 'runners', the long-term future of those non-operational vehicles looks very shaky. The former owners of TM Travel will accept scrap value for the coaches. 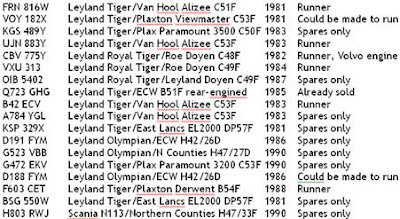 The unique reg rear-engined Leyland Tiger/ECW, Q723 GHG, has already been sold to Charles Marshall, Nuneaton (a former director of OK Motor Services, to whom the bus was new). This vehicle latterly operated with LEYTR operator Amvale Coaches of Grimsby. Leyland Tiger/East Lancs rebodies KSP 329X and BSG 550W were ex RoadCar/Stagecoach in Lincolnshire vehicles until 2008.