There are many roads far too narrow for buses and coaches to travel along. One of which is George Street in the centre of Market Rasen, Lincolnshire. On a recent trip in my car (to the LEYTR Committee Meeting in Langworth no less!) I found myself stuck behind a Stagecoach Volvo B7 as an oncoming red van decided to pass through a gap narrower than his vehicle was wide. 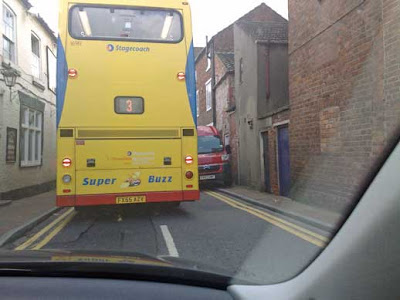 The bus driver did as I presume he'd been taught and simply applied his handbrake and let the red van do all the work. My only slight quibble with the actions of the Lincoln-based bus driver was that he could have got a little further over to the left. The van driver was of the opinion that one should never go back, ever, so eventually negotiated the tight space, smashing his nearside wing mirror on the wall in order to pass.

Without a lengthy diversion, there is no way to avoid George Street; other villages and towns have similar routes and scenarios. What can be done? The answer is: not a lot. Professional bus drivers have to rely on other road users having the same amount of savvy as they do, but with driving standards deteriorating among car drivers specifically, I can't help feeling these situations will only occur more and more.

In the Peak District there are two particularly awkward negotiations for buses to make - Service 272 (Hulleys/First) in Bradwell and Service 173 (Hulleys) in Cresbrook. The latter sees a hairpin bend that 40ft buses need to negotiate, and the only way to do so is to ground the front-end. I have photos of this in action. That'll form the subject of another post though!
Posted by LEYTR