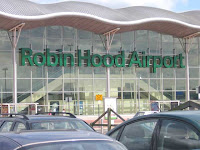 Peel Holdings, the owner of Robin Hood Airport, had their application for £4 million in "hardship relief" money rejected by local councillors last Saturday.

With yearly rates of just over £803 million the airport now says that it has had to cancel its plans to promote itself overseas and that as a result additional patronage from the near continent will certainly be nothing like it could be and that this will be detrimental to local tourism (and its finances).

The local authority argued that, if the "hardship relief" money had been granted, it would leave Doncaster's residents with just under £1 million to pay for, which would equate to a 1.1% rise in an already inflated Council Tax.
Posted by LEYTR