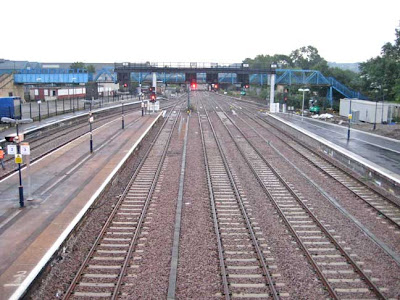 The first day's operation went well, with only one technical glitch that saw the new automatic barriers at Brayford Wharf East fail to work, necessitating manual operation. This was criticised in a rather negative piece by the Lincolnshire Echo.

The closure of Lincoln Central had a knock-on effect, with other stations in the area also without a train service for 43 days: Hykeham, Swinderby, Collingham, Metheringham, Ruskington, Saxilby and Market Rasen. East Midlands Trains used a plethora of local (and a couple of not-so-local) operators to provide replacement bus services and Northern Rail franchised out their rail replacement requirements to First, who in turn hired Kettlewells of Retford to move passengers between Lincoln, Saxilby and Gainsborough thence either Doncaster or Retford. 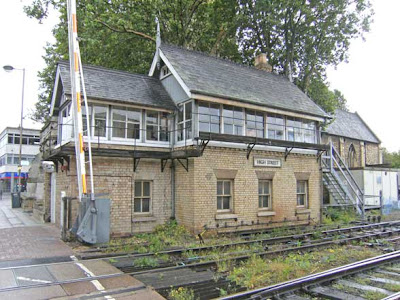 High Street signal box. It was reported to have no intended use after Phase 2 was completed yesterday yet RAIL magazine claimed a signaller would continue to man the box in order to operate the level crossing barriers here, such is the volume of traffic passing over.
In association with Northern and Network Rail, East Midlands Train produced a comprehensive timetable booklet that detailed all replacement bus timetables. It's currently still online and viewable in pdf format.

The blockade has seen around £55 million spent on the station in Phase 2 of the overall improvement plan agreed some years ago. Work has included the removal of the semaphore signals and replacing them with 48 different colour LED signals, as well as downgrading/closing the signal boxes in the area and replacing them with one main control centre. The High Street level crossing, reputed to be closed for 35 minutes in every hour, has also been upgraded as well as the replacement of 22 switches and crossing points.

While a new, large signal gantry at the western end was dropped into position using a crane, archaeologists had to be called in to safeguard an ancient monument in the adjacent St. Mary's Church. There were problems with siting the crane used to install a similar gantry at the eastern end of the station as it was to be hung-over a culverted stream and exploratory works had to be undertaken to see if the ground was stable enough to take the weight of the crane. 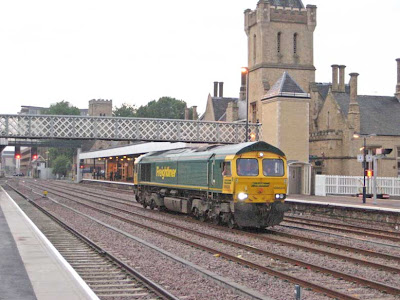 Freightliner's Class 66 (66624) was the first train to operate through Lincoln Central station yesterday morning, following the completed works.
We hope to visit the station soon to take some photos to upload. To quote Lincs FM radio DJ, John Marshall, "Apparently they tell me the station looks a bit swish!"
Posted by LEYTR