I'm a little shocked that we didn't cover the closing ceremony at the Beijing Olympic Games just over a fortnight ago, in which the British Olympic Delivery Authority (ODA) designed an event that included footballer David Beckham, musicians Jimmy Page and Leona Lewis and an Alexander Dennis (ADL) Enviro400 painted in red, typifying one of the most instantly recognisable British icons: the red London bus.

91,000 people packed into the Bird's Nest Stadium to watch the closing ceremony, when Beijing officially handed over to London as hosts of the next Olympic Games in 2012. Around 1.5 billion people around the world watch the 8 minute show that the ODA intended to be a 'calling card' for the next host city, inviting the world to come to London in four year's time. 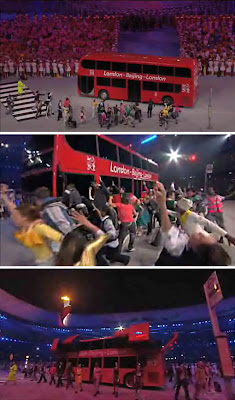 Most spectacular of all was that the red double decker's top deck opened out to reveal the performance stage where Leona Lewis and Messrs Beckham and Page were stood. It was quite an inspired performance it has to be said! The screen grabs from the tv show how the bus opened out.

The bus had a specially modified ADL Trident 3 chassis from the firm's Guildford factory, and body panels from its Scottish factory in Falkirk. The bus was assembled in Leeds where performance group Stage One is based. The lower section of the bus (effectively everything that didn't open-out) is a standard Enviro400 body; however the top section is obviously not - opening up by hydraulics to reveal the performance stage, lined with grass.

The choice of a bus to represent London was the brainchild of ADL's Corporate Affairs Director, Bill Simpson. He suggested to the ODA that a red London bus would be the best way of creating a striking visual image of London. One of the original plans being considered until London's new mayor Boris Johnson cancelled it, was for eight drivers to drive a 'real' London bus 5,000 miles to Beijing at a cost of £450,000.

The bus has since returned to the UK where it remains under ownership of the ODA, who aim to use the 'decker as a publicity vehicle, to promote the forthcoming London-based Olympic Games.
Posted by LEYTR