Is it still possible to travel on the top deck of a near-empty double-deck bus as it winds its way through the leafy lanes of Lincolnshire in 2018? Surely the double-dip recession and the relentless cut-backs to non-essential transport services would have killed off such niceties?

This is a question I'd often thought about and was able to answer today. For I had reason to travel between Horncastle and Boston - two large towns in the second largest county in England that receive just four journeys a day.

Vast fenland seperates both towns, whose hinterlands are not shared. Horncastle residents head to Lincoln, Louth or Sleaford for larger shops and the town is a draw for those living in the Woodhall Spa, Coningsby and Tattershall areas. Similarly, Boston's inhabitants have an hourly train service to Grantham (thence London or the North) and traditional inward flows are from Spalding and villages in between.

This possibly explains the very poor service between the two towns, but even so, four journeys? Really? Judging by my trip today, that would seem to be sufficient.

Granted my 1330 departure from Horncastle wasn't a typically peak journey. The schools were closed for the second week of the Easter holidays, and so today there were just a trio of journeys in either direction as one each way is a 'sprog run'. I was the only passenger to board. By contrast, forty minutes earlier, eleven passengers boarded Stagecoach's InterConnect 56 bound for Lincoln.

I'd tried in vain to find a contact number for Bryaine Travel on their professional website. It would appear this has been deliberately omitted; happily, Lincolnshire County Council's public transport department, who's responsible for producing decent timetable information at most stops throughout this sprawling county, had included a phone number in the Operators legend.

Having established my fare was £5.30, soon after the bus turned up. From the timetable it had returned from a circular service (A8) from Horncastle to Roughton then a one-way loop via Woodhall Spa, Tattersall Thorpe, Coningsby and Kirkby-on-Bain before returning to Horncastle via Roughton. The bus was an ex-Stagecoach London TransBus Trident/TransBus ALX400, LX03 BWW, which still displayed its previous fleet number in the upper saloon, 17803. 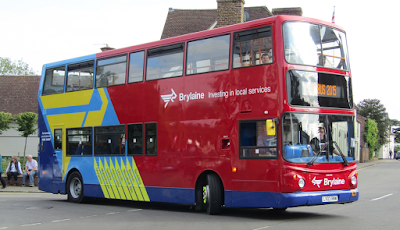 Brylaine uses Ticketer for its ticketing system and they were one of the first operators nationally to offer a free mobile app that shows the location of all their in service buses. This went live before the Stagecoach and East Yorkshire apps, which we've detailed in recent LEYTRs. Frustratingly I'd left my mobile phone at home today and so was unable to check to see how accurate this app is.

Having waited time for a few minutes, we left at precisely 1330. As with previous journeys I've made by bus - the most similar being Trent Barton's Comet service from Chesterfield to Derby - timings seem incredibly tight. At no point did we leave any timing point early, yet we never stopped to pick up or set down any passengers.

I was the sole passenger on board for the entirety.

In answer to my question, yes it is still possible to travel on the top deck of a near-empty double-decker as it wends its merry way around rural Lincoln. The route, while starting off on main roads, soon becomes intricate and involves single-track roads for long periods of times, with the driver expertly negotiating oncoming cars, vans and tractors. Through Wood Enderby to Mareham-le-Fen, Revesby, New Bolingbroke and Carrington before heading off down more winding, narrow lanes from Cowbridge to Frith Bank then back into Boston alongside the Maud Foster Drain and then via John Adams Way to reach the bus station in the town centre.

Lincolnshire bus travellers, similar to neighbouring Norfolk and Cambridgeshire, are afforded great views from the top decks of their buses. While many consider the Fens to be flat and boring, on a clear day like today you could see for miles. Unlike more rugged terrain, I feel that the Fens make you appreciate what a small pawn you are in a much larger game.

Brylaine's Service A6 is part-subsidised. The first journeys in either direction cater for school and college students, more so the journey to Horncastle which only runs on schooldays; the equivalent journey to Boston still operates during school holidays. There are then two late-morning/early-afternoon journeys fulfilling the leisure market role before last departures in either direction. From Horncasle this is a blatant school bus, starting at the Banovallum School and not operating via the town centre; from Boston the departure is at 1715 and doubles again as a college bus/commuter bus home.

Later on in the afternoon I stumbled across another journey involving a double-decker through rural Lincolnshire with very few on board. Centrebus's Service 26, from Grantham to Aslackby, though that, as they say, is another story...
Posted by LEYTR

Centrebus's Sleaford - Grantham 27 is usually 'decker operated, too, because of the school time loadings, but off-peak you may have the bus to yourself...

A shame that Centrebus seem to have withdrawn their network day ticket* which was good value for a day wandering around the Leicestershire-Lincolnshire-Rutland borderlands.


* It's no longer mentioned on their website or the individual faretables, so I assume it's been withdrawn.

After parking your car aside by a place and taking a trip of the city on the double deck bus is so exciting for travellers. Thanks! cheap airport parking