They say the London 2012 Olympic Games was a once-in-a-lifetime opportunity for the population to engage themselves in the Olympic Spirit. For a chap called Nigel Busbridge and his team it most certainly was. For Busbridge is operations director of coach company Buzzlines, based in Hythe, Kent and he got a special call many months ago from the organisers of the Olympic Torch Relay, asking if his company would be able to supply a pair of coaches to help transport the Olympic Flame, its security detail, police officers and those who'd be running with a lit torch around the country. 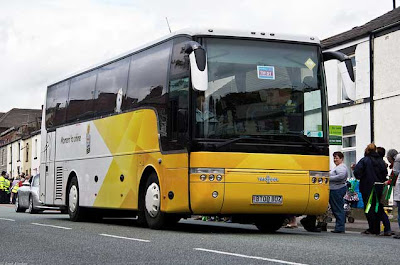 The eldest of the two coaches supplied by Buzzlines is seen here on Day 36 of the Relay (Lytham St. Annes to Manchester) along Manchester Road, Bury. (Photo: Ingy The Wingy)

The 70-day, 8,000-mile marathon commenced at Land's End in Cornwall on Saturday 19 May and the route would see the Buzzlines coaches come within 10 miles of most of the UK population. The relay ended at the Olympic Stadium on Friday 27 July.

For the staff chosen to drive the two Van Hool T911 coaches, it was a genuine life-changing experience, that's for sure. It's something I'd very much have volunteered for. While the coaches didn't follow the exact route of the torch at all times, they were very much in its shadow throughout the journey that passed through over 1,000 settlements in Great Britian and Northern Ireland. Two 42-seater coaches from Buzzlines's fleet were chosen, BT08 BUZ and BT11 BUZ. One of the coaches operated without any interior alterations, while the other was extensively modified as it was to carry the torch itself, along with its security detail. 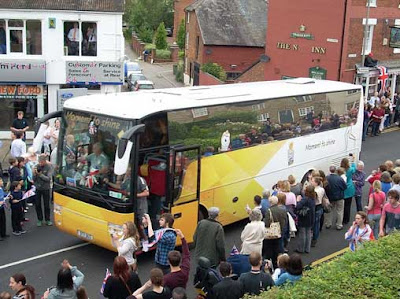 BT11 BUZ was the coach that carried the Olympic flame and was modified as detailed below. It is seen here on Day 52 of the Relay, travelling from Luton to Oxford. (Photo: Adam Floyd)

In fact, the 'main' coach had its interior split into two sections, with the forward half acting as the command centre, containing a dozen seats around a few tables with communications equipment installed. The rear half was where a number of torchbearers were seated along with the police security and a specially made cabinet which housed the Olympic flame.

Now the relay is over, I suspect the operator and people connected with the mammoth trip are able to speak freely about it. There will surely be many stories to tell. It's something Buzzlines can boast about with pride. An accolade like no other.
Posted by LEYTR