Like many who are the right age, I equipped myself with a Young Persons Railcard (YPR) for a number of years in order to save around 34% on lots of train journeys. I always smiled at one of the lines in the then application form, promoting the YPR, which said that for the price you initially had to pay, you could make that saving on your first journey. The implication was that the discount received was superb, when really it was a rare occasion at ATOC acknowledging how bonkers some rail fares are. 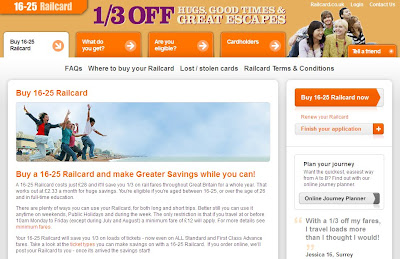 However, as I approached the upper age limit I began to use mine less and less as the online advance tickets were even cheaper than the off-peak online tickets and they had no further railcard discount.

I was glad to read the other day that ATOC has revealed a whopping increase in YPR sales of 60% over the last year. During 2011, 1.2 million YPRs were sold, which is broadly worth £33.6m to the train operating companies. Each railcard holder is calculated to make a saving of around £159 per year on an assumed 40 journeys during the same period.

I'm more shocked about the latter figure - 40 train journeys each year? That's just over 3 a month which, perhaps, is broadly accurate for a student at university who visits home semi-regularly or makes a short trip somewhere local with friends while away, but YPR holders can use one until they turn 26 - many years after the typical student has left uni.

I wonder how many of those using a YPR do so when the ticket they ultimately purchase doesn't offer a further railcard discount as the ticket type is ridiculously cheap? In the age of austerity when savvy commuters and leisure travellers are shopping around online for the cheapest, inflexible train tickets, more and more will not offer any railcard discount at all. I'd urge anyone reading this who is in possession of a YPR (and has therefore paid £28 this year) who isn't likely to make the average 40 journeys by train this year, to see just how often the buy a ticket online that offers no reduction for the YPR.

As I discovered, the infrequent traveller, who probably travels enough to save more than the cost of the YPR in train tickets over the year, may not actually do so if they prefer to use advance tickets purchased direct from the train operator's website. A friend attended Aberystwyth University a few years back and, like most who studied there, bought himself a YPR yet as he returned home just three times a year - all booked months in advance to coincide with the end of term - wasted money as the tickets he purchased were all advance and offered no YPR discount at all.

Are you sure advance singles don't offer railcard discounts? I'm sure every ticket I've bought (be it 80p to £50) has been somewhat reduced since I obtained my railcard! From the website:
"The savings

Your 16-25 Railcard will save you 1/3 on rail fares including all Standard and First Class Advance tickets." http://www.16-25railcard.co.uk/what-do-you-get/features

Or am I being naive, and the discounts offered by the operators are separate tickets?

In my experience I've never received any discount when purchasing Advance tickets with a number of operators direct from their website. Like everyone who purchases them, an additional discount is added for buying direct from them (East Coast, for example, offers an additional 11% reduction), but nothing more, whether you check the Railcard box or not.

Charlie is quite correct: Railcard discounts *are* offered on *all* Advance fares (although this was not necessarily the case before Sep 2008's fares "simplification").

I never had a problem obtaining the discount when I was a Railcard holder: it was always offered regardless of which site I was using to make the booking. The only possible reason for not being able to get a discount that I can think of is the advertised minimum fare (GBP12.00 before 1000 Monday to Friday, excluding public holidays, July and August).

Indeed - pre the 2008 'fares simplification', some TOCs (e.g. GNER) didn't offer Railcard discounts on their advance purchase tickets (which went under a variety of different names). However since the simplification all 'national' Railcards give the third-off discount on all Advance tickets.

(I say 'national' Railcards because regional/local products such as the Network Railcard in the south east of England don't offer a discount on Advance fares.)