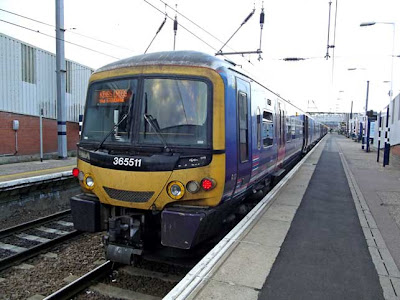 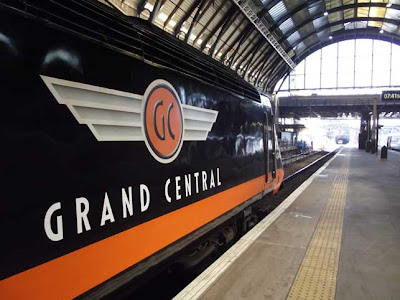 In London, we caught Grand Central's service to Sunderland, today formed of a HST set. 43465 is seen here leading the 0747 departure.
We depart a couple of minutes late from King's Cross. In the front coach I record our departure into Gassworks Tunnel. 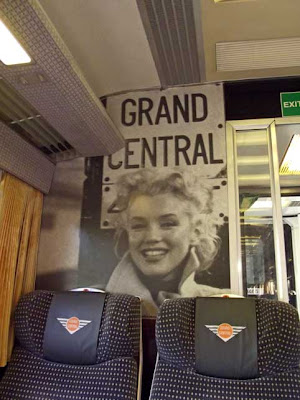 Marilyn Monroe is seen at the vestibule ends of Grand Central's coaches, emulating the railroads of America.
Grand Central's Sunderland trains do not call at Doncaster, so I recorded our passing using the Down Fast line. Sadly, the maximum 100mph we were permitted to travel at was not attained as we'd been held outside the station previously.
Once in Sunderland, our HST returned to the Heaton depot to the east of Newcastle city centre. The rear loco, 43468 is seen here. 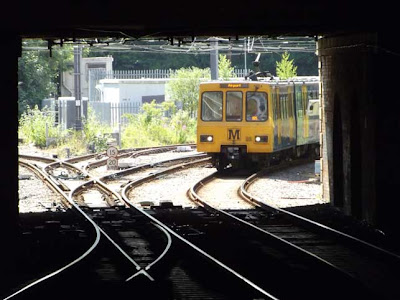 We caught the 1159 Tyne & Wear Metro service from Sunderland to central Newcastle. Sunderland station is a very convenient interchange between heavy and light rail, with both train types using the same infrastructure. 4054 is seen here, leading 4082 into the station.
At Central Station in Newcastle, I record our train departing. Sadly, the HD credentials of my camera do not cope well when recording anything moving up close.
We headed to the surface and a few minutes ahead of schedule, East Coast's 1240 train to Edinburgh arrived, with 91126 leading it in. 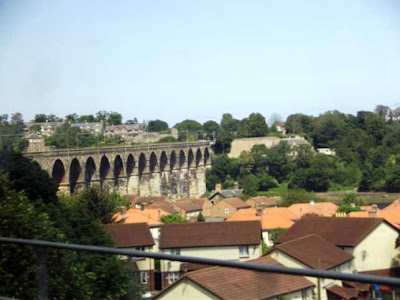 Seen here immediately prior to crossing is the Royal Border Bridge, just south of Berwick. 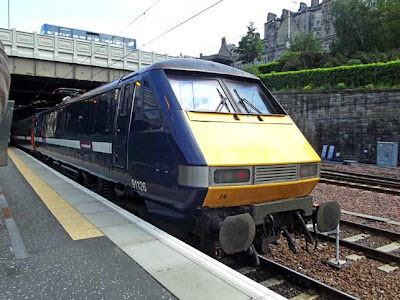 In Edinburgh Waverley I managed to properly photograph our Class 91 that hauled us from Newcastle, 91126. The DVT on the rear was 82231. 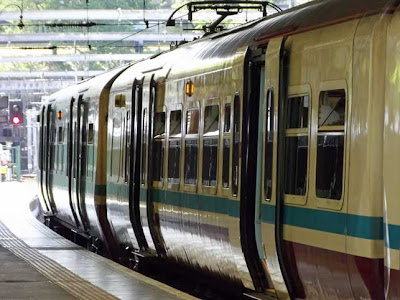 My first trip on a Class 334, which wears a livery reflecting the corporate colours of Strathclye Passenger Transport authority. It does not look as fresh or modern as it could do. 334018 was our train, departing at 1437, operated by First ScotRail.
Prior to last December, it was not possible to travel from between Edinburgh and Glasgow via the route we undertook, using Bathgate and Airdrie. This section was re-opened on 12 December 2010 and I took a short video of us travelling over the new metals. 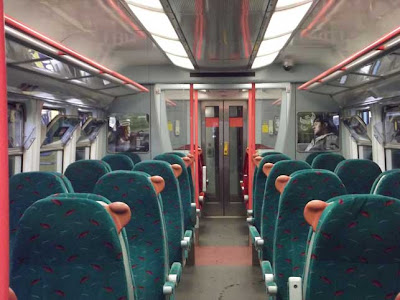 The interior of the 334 was more attractive in my opinion than its exterior.
I recorded our Class 334 leaving Glasgow Queen Street at 1544. 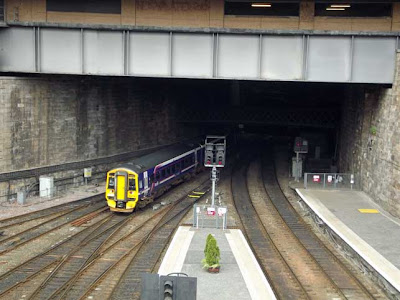 We had time in central Glasgow before out next train so had a walk to the Buchanan Bus Station. En route a nice shot of the entrance to Glasgow Queen Street presented itself, where I captured a Class 158 departing. 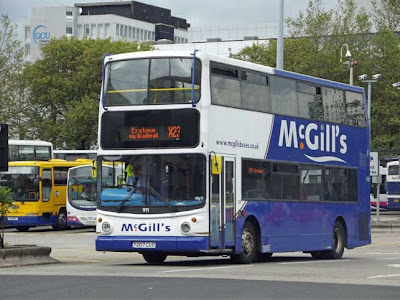 An immaculate T-reg Dennis Trident/Alexander ALX400 is seen here, operated by McGill's. The bus was new to Metroline London Northern in 1999. 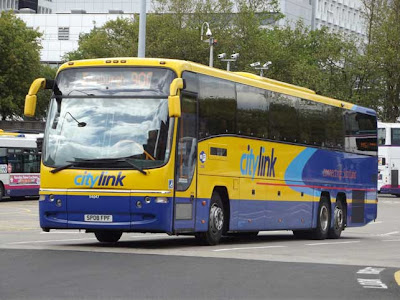 Seen here heading from whence we came is a tri-axle, 65-seater Volvo B12B/Plaxton coach operated by Stagecoach under the Citylink name. SP08 FPF was new to their Strathtay subsidiary but has since been moved to their Glasgow operation. 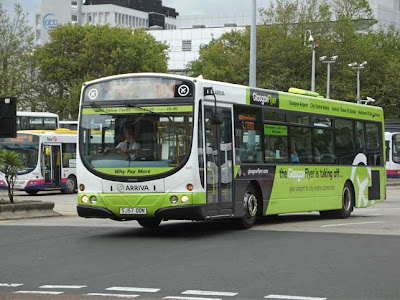 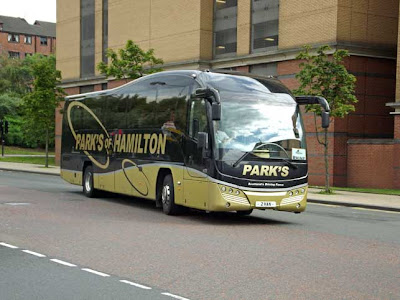 Just before we left, we spotted a private hire arrive, operated by Park's of Hamilton, using a Plaxton Elite-bodied Volvo B9R. It was bound for the Rhineland - quite a trek from Glasgow. 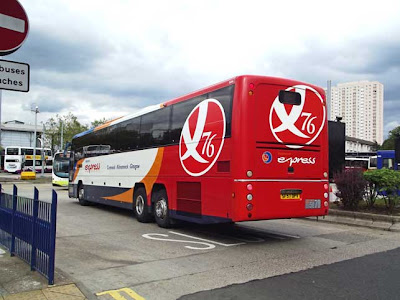 Closely followed by another of Stagecoach's tri-axle Volvo B12Bs, though this time wearing its corporate livery, with branding for Service X76 (Cumnock-Glasgow). SF57 DPV was new to the company's Western subsidiary in 2008. 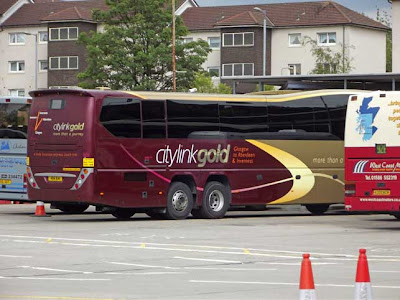 And finally is a tri-axle Plaxton Elite-bodied Volvo B12B, HSK 641, in the Citylink Gold livery. This coach is operated by Park's of Hamilton, who use identical vehicle specification to Stagecoach, who also provide new vehicles for the Citylink Gold network. Designed by Best Impressions, this livery is one of my all-time favourites. 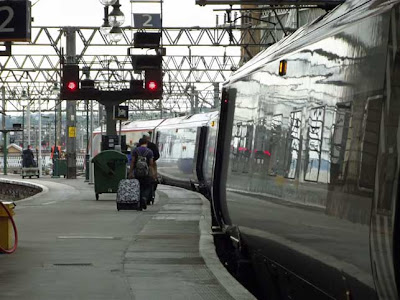 We headed to Glasgow Central where we were to catch the 1640 Virgin Trains service to London Euston. Virgin Trains uses the lower numbered platforms, which snake into the distance. 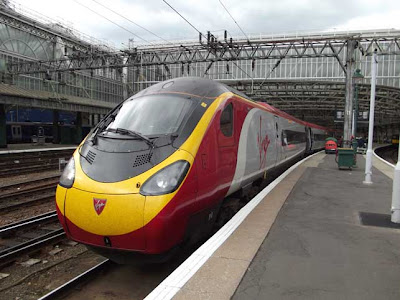 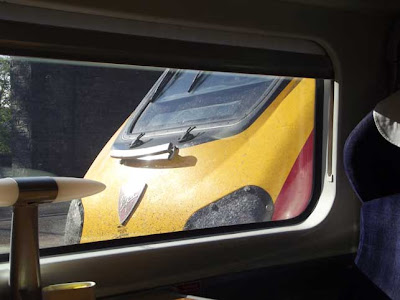 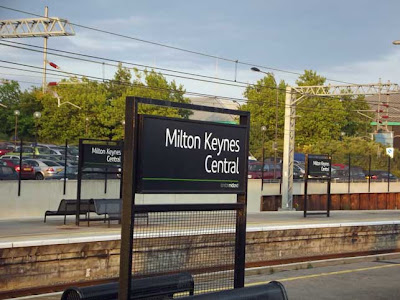 Nearing London now, one the last leg of Day 1 - we called at Milton Keynes. Virgin has reduced the number of trains calling here with the introduction of their Very High Frequency timetable last year. 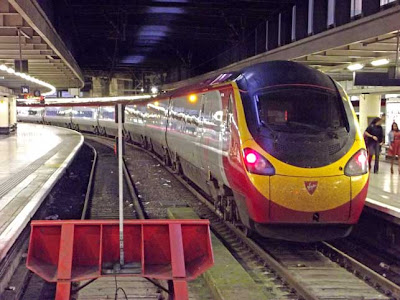