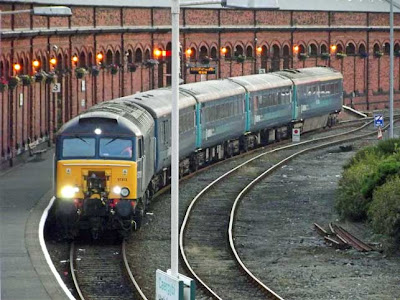 Today was our earliest start, catching the 0532 Arriva Trains Wales service from Holyhead to Cardiff Central. It is referred to as the WAG Express on account of the Welsh Assembly Government funding this special loco-hauled train's operation. A Class 57 leads a short rake of four mk2 coaches in a return trip each week day. 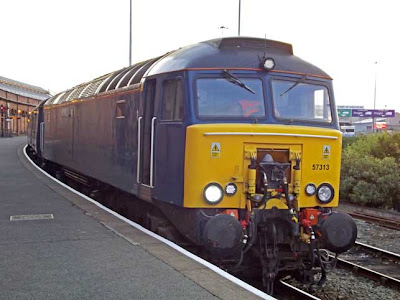 57313 has been loaned to ATW by Virgin Trains. The loco is painted in Arriva's green livery. We spotted the set stabled overnight at Holyhead station. 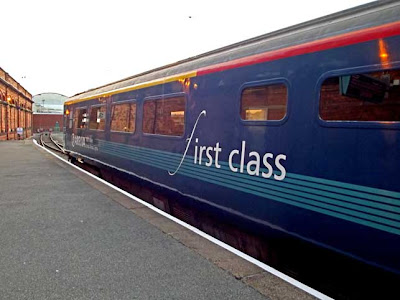 The train features a First Class section in the rear carriage, which is shared with the kitchen. The service is called the Premier Express by ATW and is one of just 4 journeys each weekday on the national rail network to offer a dining service.
It isn't immediately recognizable, but if you re-watch the above video and play close attention to the Anglesey station name sign as it flies past, you'll see why I recorded it. 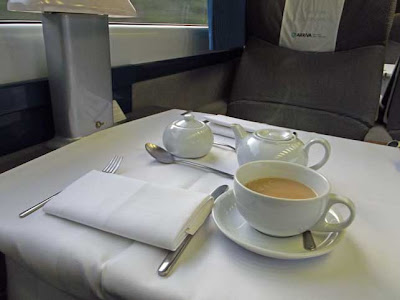 A complimentary three-course breakfast is offered to those travelling in First Class, where reservations are compulsory. There is seating for 24 passengers in First, but on our Monday morning journey (the busiest of the week according to two guards we spoke with) no more than 13 travelled at the same time. 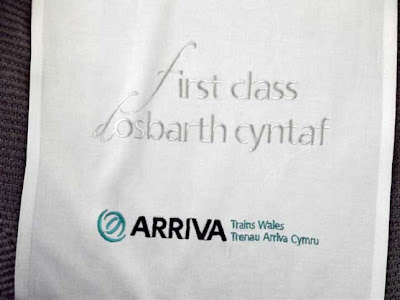 As far as I know, the Premier Service is the only service offered by ATW with First Class antimacassars - printed on in both English and Welsh, naturally.
We slow down, only briefly, to pass through Hereford at our scheduled passing time of 0858. 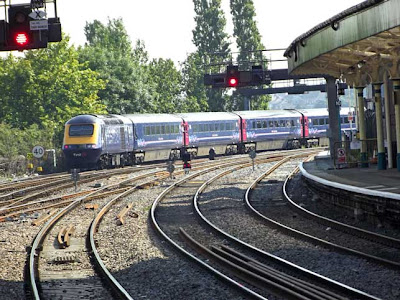 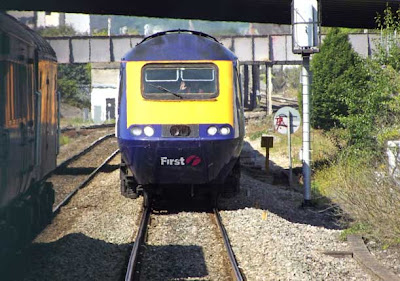 We were held outside Cardiff Central while a platform became available. The curve in the track made this photo possible. If you look closely, you can see the HST driver acknowledging the driver of our '57'. A video of the train passing is below: 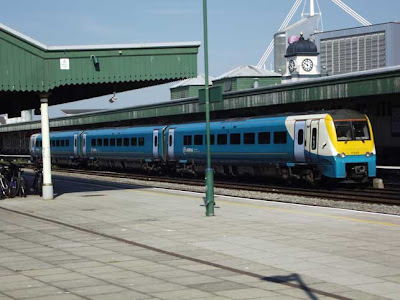 Once in Cardiff, the sun shone bright and made for a number of excellent photos - seen here is a Class 175 Coradia, operated exclusively by Arriva Trains Wales. Hitherto, the batch of 27 had been split between the erstwhile First North Western and TransPennine Express. 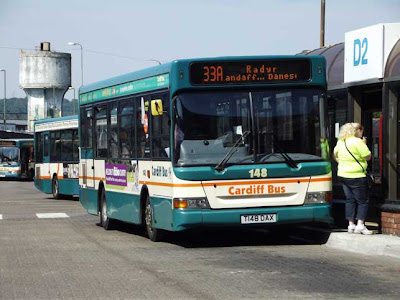 Time for a spot of bus photography, the sun lending itself well to some nice shots in the bus station outside the station. Cardiff Bus is one of a dwindling number of council-operated bus companies and as is becoming more and more common, turns its vehicles out to a very high standard. This Dennis Dart is 13 years old and looks as if it is new. Sadly, this is an area the larger multi-nationals don't concentrate on in my opinion. And this standard was consistent throughout the entire Cardiff Bus fleet that we saw in our hour here. 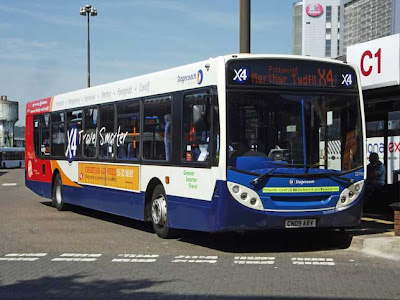 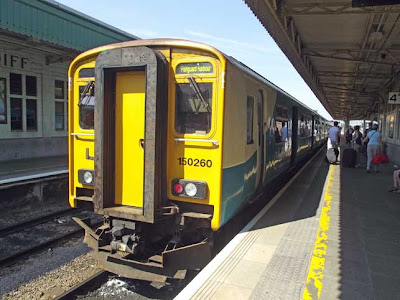 Back to our jaunt and our next journey was aboard ATW's 1057 service to Fishguard Harbour, operated, to our dismay, by a Class 150. That said, it was well presented inside and its journey time was 1:32 with just 2 intermediate stops. Are there many other journeys that see an ageing Sprinter like this attain a relatively constant speed for such a duration? The train's maximum 75mph was reached on many occasions. 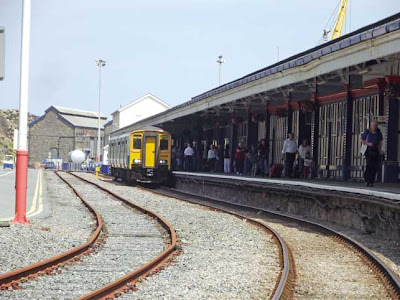 We arrived pretty early into Fishguard Harbour. Rather than the 5 minute turnaround we had over 15. The train emptied with people for the Stenna ferry to Ireland and loaded with people who'd recently disembarked from the same ferry. Fishguard Harbour is a good sailing point for people travelling to/from Cork.

We departed Fishguard Harbour at 1330 and alighted at the first stop, Whitland, where there is little to do in the time we had, so I tried out my camera's panoramic facility. 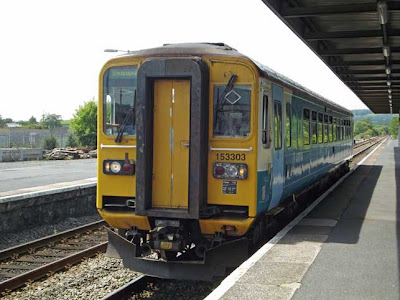 From our Class 150 to another of the Sprinter family, this time (as m'colleague calls them) a dogbox, 153303. It went very well indeed and was more than adequate for the numbers that used the ATW service at 1450 to Swansea. 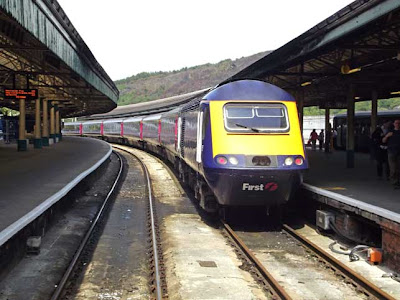 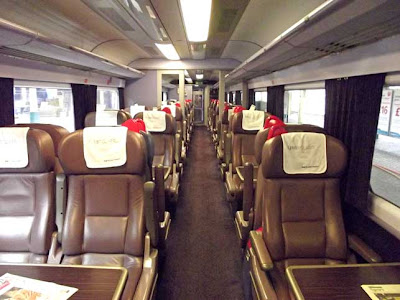 My favourite First Class interior is that aboard FGW HSTs. Sumptuous. The benchmark to which all others must aspire. Sadly, FGW does not provide Wi-Fi of any description. They need to catch up here. Our carriage filled up due to one of the First Class carriages having a problem with its heating. 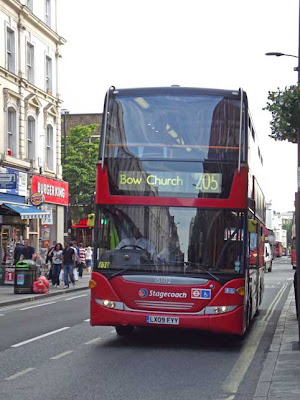 We arrived into London Paddington a couple of minutes behind schedule, after 'overtaking' a failed service from Newquay. We were incredibly lucky to be able to undertake this manoeuvre outside Didcot as there are only two tracks in this section. We headed to Praed Street and caught the 205 to Euston station, operated by Stagecoach in London. 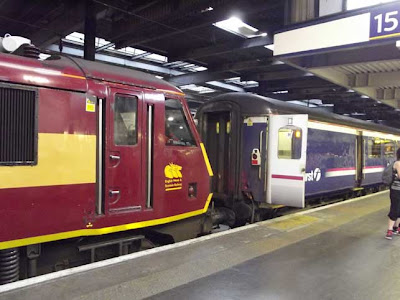 An hour or so in the First Class Lounge at Euston passed the time - sleepers do not have 240V sockets in the cabins so we used the facility in the lounge - and headed to Platform 15. A DB Schenker-operated Class 90 hauls the rake of carriages in from where they're stabled throughout the day at Wembley depot. Today, 90029 The Institution of Civil Engineers had done the deed, though its involvement with our 2115 departure to Scotland had now ended. 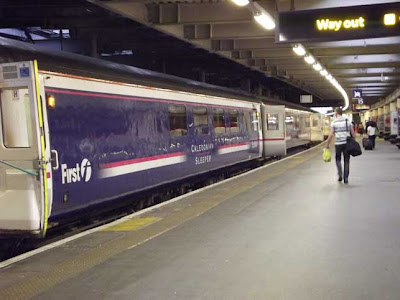 Sixteen carriages form the Caledonian Sleeper services. The first 4 are for Fort William, the next 6 are for Aberdeen and the final 6 are for Inverness. First ScotRail's livery is applied to the rake and DB Schenker have the contract to haul the services, with a Class 90 providing the motive power between London-Edinburgh and a Class 67 between Edinburgh-Inverness/Fort William/Aberdeen. Tonight, 90036 was to haul is to Scotland. 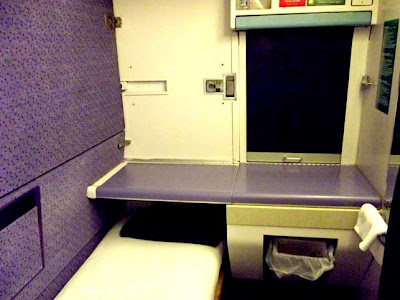 The cabins have not altered since the 2005 LEYTR Railrover, which was our last time on board a sleeper service. A single bed, sink, movable work top, pull-down table, bin and fixed window (with blind) come as standard, along with additional bedding, a complimentary wash bag and breakfast the following morning. An adjoining door can be requested when booking.