There are only a handful of lines forming the London Underground network that I've yet to complete - easily accomplished in a matter of hours I suspect - and in preparation for the trip to that there shiny London, I've been looking for new Tube maps. One I stumbled across only this morning, hot off the press: 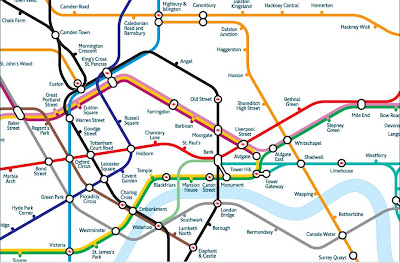 It has more of a Harry Beck feel to it than other more geographically accurate versions I've seen, that's for sure. The Thames also reflects its natural shape.

It has been produced by Mark Noad to address problems people have using the original, iconic diagrammatic design. A recent study claimed a large number of people (tourists, presumably) travel greater distances between two points using TfL's official production than they should. Noad's map aims to be more spatially aware.

True geographical accuracy makes the Tube network look horrendous in map form, specifically in central London, for obvious reasons, while acres of space is given to a small handful of stations at the extremities. Noad's map could be seen as a compromise between this and Beck's design that TfL modifies and produces.

Have a look for yourself by viewing the new map in its entirety.

Adding in wheelchair accessible stations, Crossrail and Thameslink may not be as straightforward to a map like this though. That said, on the pdf version, zones have been nicely added. You may spot that Heathrow Express and Croydon's Tramlink are included, which aren't on TfL's. To this end using St. Pancras to Stratford International as a faster way between two points with Southeastern could be shown. A couple of things that are on TfL's but aren't on Noad's are the off-peak curtailment of Northern Line trains at Kenington isn't made obvious and that owing to the location of the interchange 'blob' at Euston, it isn't made clear that travel to King's Cross St. Pancras from the Northern Line's Charing Cross branch isn't possible.

If you want to know about designing tube maps, go to this website. I've been researching into these issues for over ten years now, and have more than enough alternatives for everyone to choose from. Few of them are as nasty as the map shown here.

What both these maps show is the horribly parochial nature of London Overground in that a subset of useful 'heavy rail' lines are shown because they happen to be a TfL concession whereas a larger group of other such lines are completely omitted. Try plotting a journey from Victoria to West Croydon from this map, or from Sydenham to London Bridge.

Come on National Rail and TFL - get your act together!