When the legislation regarding acceptance of the English National Concessionary Bus Pass was tightened in 2009, a number of hitherto bus (and coach!) services managed to struggle free of the scheme. Park and Rides was one, another was scheduled coach services, where the majority of seats were bookable in advance. Another was open-top tourist services.
We've not heard of any park-and-ride schemes openly refusing to accept the free bus pass in England (though please let us know if there are any examples), but National Express was soon to stop accepting bus passes for use on sections of its coach network that it registers as local stopping services to claim BSOG. Recently, North Yorkshire County Council has said it is looking into how feasible it will be to not offer any reimbursement for bus operators providing Scarborough's seafront service. 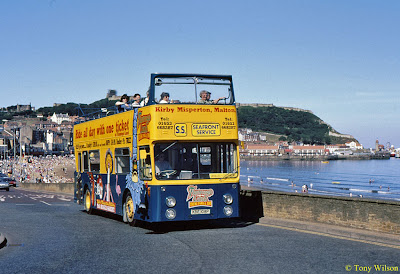 Shoreline Suncruisers used to operate this ex-GCT Daimler Fleetline, KBE 108P, along Scarborough's seafront. (Photo: Tony Wilson)
Service 109 is the bus route in question, running between Scarborough's North and South Bays, terminating at The Spa. Shoreline Suncruisers operate traditional open-top double-deckers. EYMS do the same. The frequencies vary depending on the height of the season. EYMS, for example, have three different timetables, with buses operating up to every 12 minutes. Shoreline Suncruisers (who used to run an ex-Grimsby-Cleethorpes Transport Daimler Fleetline/Roe for many years, complete with GCT notices inside) operate a bus up to every 10 minutes at peak times.
The County Council claim that enforcing the open-top exemption will save them £240,000 a year. We all know too well that local bus services are seen as an easy target when looking to balance the books. But is imposing this restriction to a seasonal, open-top tourist service going to have such a detrimental effect?
Locals are naturally concerned that people won't travel down the seafront as much and so money spent in shops could reduce. Holidaymakers could choose to not venture away from the area of the town where they're staying, or where they've parked their car. On the other hand, is it too much to ask tourists of a certain age visiting Scarborough to pay to use the open-top service? The government clearly doesn't think it is, otherwise they wouldn't have placed the exemption in the legislation. 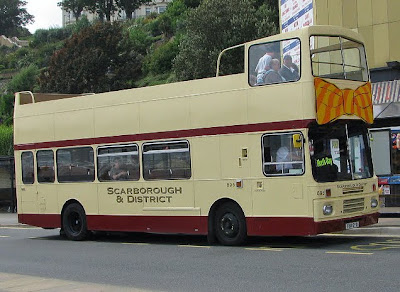 EYMS's Scarborough & District operates along the seafront using Volvo Citybuses. If NYCC has its way all passengers will have to pay to travel on this service. (Photo: DWB Photos)
A consultation has been launched and the County Council has said it will consider very carefully the views expressed.
LEYTR Comment: Times are tough. As detrimental as locals may consider this move to be (if it's implemented) it is a better way for the local authority to save almost a quarter of a million pounds than taking an axe further to the local bus services that residents rely on so much. Councils that have seaside resorts have to pay a disproportionate level of reimbursement to operators than land-locked authorities. Many would argue that this is far outweighed by the benefits tourism on this scale brings to the local economy though. If Service 109 becomes exempt from the bus pass scheme, we can't see it forcing holidaymakers to go elsewhere.
Posted by LEYTR

The exemption is not for "open top services", it is for "Services operated primarily for the purposes of tourism or because of the historical interest of the vehicle"

According to the DfT it is intended to exclude sightseeing tours and the like, not local bus services in areas popular with tourists.

The real problem here is that the DfT came up with some conjuring tricks last year to cut the amount they pay to local authorities to reimburse bus operators for carrying concessionary pass-holders (and new guidance to justify local authorities in cutting their reimbursement), and dressed this up in a smoke screen about 'efficiency savings'

Surely what sets out to be a pro-public transport website ought to be arguing more that the government is short-changing public transport, rather than seemingly blaming passengers for using it, and encouraging the spiral of decline to start again...

Irrespective of the politics, if the free concession is removed from the service, will it have a negative effect to the area. This is what local residents fear most. We believe it does not and tried to offer a balanced argument.

It is also possible to travel very near to and between both terminal points using conventional bus services with the town centre, which would not be excluded from the scheme. Presumably because of this, Service 109 with its open-top 'deckers is seen by NYCC as being operated primarily for the purposes of tourism.

Locals can hold their county council to account. As we make clear in the article, it is likely to be the first instance of its kind in the country and we certainly don't want to see it spread. But in the harsh light of day, residents of Scarborough need to consider where else the CC will make £240k saving if not from the open-top tourist seaside bus service.

And I think we all know the answer to that.