New industry magazine Passenger Transport revealed that FirstGroup is no longer the UK's largest bus operator, being overtaken by Stagecoach. 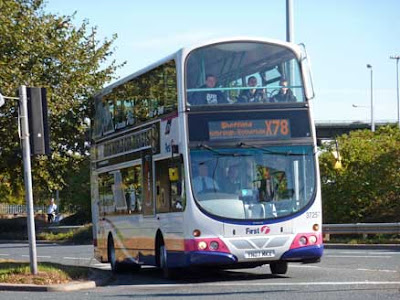 Taken at Meadowhall during September 2009 is a vehicle now synonymous with First's UK bus fleet - a Wrightbus Eclipse Gemini-bodied Volvo B7TL
In its 2010 Annual Report, First stated that it operated 8,500 buses, but with the announcement just over a week ago that the company has placed a £160 million order for 955 new buses, has updated the number of vehicles in its employ, scaling down to 8,000.
By comparison, with Stagecoach acquiring the East London Bus Group from Australian bank Macquarie at the end of last year, an additional 1,300 buses were added to the company's nation-wide total of 8,100.
Passenger Transport claims that First operates 14% fewer buses today than it did in 2005, with the reduction in vehicles mainly taking place over the last six years, though with particular pace during the last eighteen months when the company chose to rather brutally cut mileage by a fixed 10% nationally, rather than trim gingerly and invest. 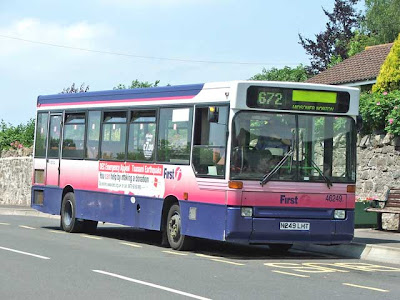 Seen at Cheddar Gorge during June 2005 is a Dennis Dart/Plaxton Pointer. At this time, First operated well in excess of 9,000 buses in the UK and that year heralded something of a watershed for the company's vehicle numbers
A further reduction to First's UK bus operation was announced today, when the company's East England division announced its intention to sell its King's Lynn network to rival operator Norfolk Green.
Of course, operating the most - or second-most - buses in the country matters not one jot. If anything, public perception of this can be a hindrance, with passengers believing that a bigger fleet means a bigger financial pot from which to draw and to operate more services. Sadly the privatised bus industry does not work like this!
Typically, a Stagecoach spokesman was quoted as saying: "We've never been fixated with being the biggest bus operator. Like our customers, we believe that offering the best value bus travel in Britain and providing a greener, smarter alternative to the car is more important." 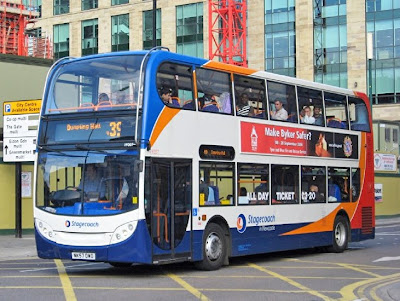 Stagecoach is now the UK's largest bus operator and now opts for Alexander Dennis products, presumably because its founder and chief executive has a personal stake in the business. Seen here in Newcastle is a ADL Trident 2/ADL Enviro400
When it comes to trains however, Stagecoach operates the largest train operating company (SWT), but First's interests - one in partnership with Keolis - are considerably larger.