Both m'colleague and I are reasonably rare in the transport enthusiast fraternity to have an equal interest in both rail and bus/coach. This has not always been the case for either of us, but for a good number of years now, our interests have been in both modes in equal measure. What we have found is that there are far fewer hardened railway men who take an interest in buses than there are bus men who do in rail.

The rail industry is so vast that there's more than enough going on daily to occupy even the most hardened enthusiast, while the bus and coach industry's fragmentation can be daunting to follow at times, plus there are areas where rail and bus/coach overlap or compliment each other, with rail usually being the dominant party and so attracs the attention of bus men.

However, neatly observed this week on Railway Eye was Stagecoach's recent press release in which the company boast their investment credentials with a multi-million pound order for over 300 new buses. A rare glimpse of the rail industry's observers doffing their hat to their bus and coach counterparts is demonstrated wonderfully in the screen grab below: 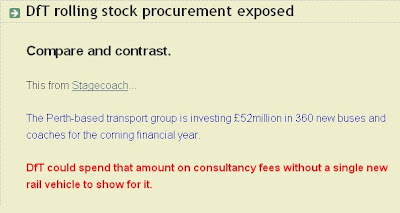 Click to enlarge
Love or loath the privatisation and deregulation of the bus and coach industries, the worrying trend in expenditure by our regulated railway could well have been mirrored by the National Bus Company had Mrs T not got her way.