It's no laughing matter but there are a couple of similarities between a recent news story from Blackpool and the latest in the world's longest soap opera, Coronation Street.

Viewers of the soap will be well aware of the events one week ago, which saw a two-car Bombardier M5000 tram in the new Manchester Metrolink colour scheme derail on the viaduct that passes the end of the nation's most iconic street, plunging onto the cobbles via a corner shop and the Kabin newsagent. Turn the clock back even further and a storyline took place in Blackpool itself where character Alan Bradley was killed by one of the town's iconic trams while in pursuit of Rita Sullivan (was her surname Sullivan then?). 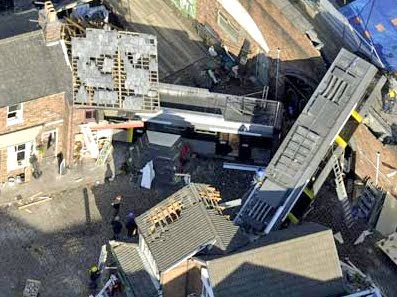 Carnage on Coronation Street as a tram falls from the viaduct after an explosion from the club beneath
August 2009 saw something very similar happen in Blackpool, when one of the towns trams killed a 70-year old holidaymaker who was at the resort celebrating her wedding anniversary. The driver of the tram was sentenced to 15 months in prison at the end of last week, after pleading guilty to the charge of causing death by careless driving.

In Coronation Street, neither tram-related incident was the fault of its driver but the two storylines and the latest from Preston Crown Court have firmly put trams in the the minds of millions more people in this country over the past seven days then before. In Blackpool last year, 70-year old Maureen Foxwell was killed as she crossed the tracks immediately beyond a stop at which a number of people were awaiting the oncoming vehicle. She and her husband assumed the tram was slowing down to stop, but the driver - Paul Edensor - had other ideas. He chose not to stop for the intending passengers (his tram was 'in service') and killed Mrs Foxwell. 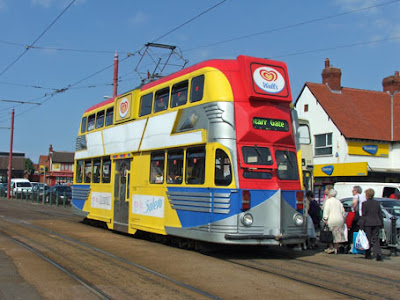 Edensor, who'd been disciplined before for speeding, was travelling more than three times over the permitted limit speed at the time (estimated 13-17mph in a 4mph section of track). During the trial it emerged that Edensor also had 12 previous convictions relating to 23 offences. Detail of what these convictions were and if they were related to his employment with Blackpool Transport were not made known.

LEYTR Comment: In many ways, driving a tram requires more concentration and faster response times to that of a heavy rail train or locomotive. On-street running is something train operators do not do. Cars, cycles, buses and pedestrians are all additional hazards to contend with while controlling a vehicle not dissimilar in both size and length to those which link Manchester with Leeds or run along the Cornish branch lines. Many tram drivers use their experience to gain promotion and become train drivers. A friend of mine did just that and found the job of becoming a train driver far easier than driving around the streets of Sheffield in a tram.

Of course the incidents highlighted above are, thankfully, not representative of the professionalism with which tram drivers carry out their duties. The Blackpool Transport employee had a long line of offences against him and had previously been disciplined for speeding. Consequently a custodial sentence was to be expected. The light rail industry has no place for people like him. Compared with Coronation Street's portrayal of trams last week and in Blackpool many years ago, neither incident could be blamed on the tram nor its driver. We just hope others see this in the same light and that no ill effects are felt on tram patronage nationally.