With news that a new 13-mile busway has been given the go ahead, following scrutiny over its likely cost, Transport Secretary Phillip Hammond has given the green light to a bus lane along the M4 motorway being scrapped. If you've ever watched any episode of Top Gear, ever, you'll have heard Clarkson witter on about this infringement of his civil liberties.

Measuring in at 3.5 miles long, the stretch of pink tarmac in the outside lane of the M4 motorway saw buses and coaches given the opportunity to overtake all the expensive cars that had long passed them, while heading London-bound. It was the brain child of former Deputy PM John Prescott. The Tories do not see it as a useful and efficient tool for ensuring the safest mode of surface transport reach its destinations as quickly as possible, but that it is a good example of Labour's 'war on the motorist'. 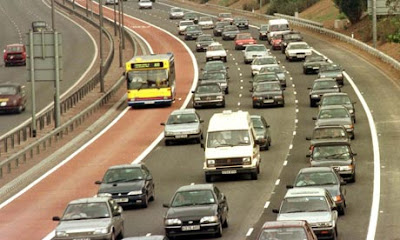 Look! A bus. Someone ought to contact Mr. Clarkson!
The Transport Secretary will officially announce the bus lane's suspension from Christmas Eve at the Conservative Party Conference next week. Only during the 2012 Olympic Games will it become 'live', before being scrapped permanently.

Aptly named 'Petrol-head Hammond' will say in his speech to delegates next week: "Nothing is more symbolic of Labour's war on the motorist than the M4 bus lane.... It was John Prescott's idea and I think that says it all. I can announce today that from the end of December until the Olympics the M4 bus lane will be suspended. And once the Olympics are over, my intention is to scrap it permanently."

Such arrogance against a stretch of road does not bode well for bus and coach operators, for it is Hammond who has the final say on how the potentially already-agreed DfT budget will be divvied up.