Faced with the prospect of not withdrawing all articulated buses from the streets of London before the end of his first term, London Mayor Boris Johnson has instructed TfL to move forward the re-tendering date for the remaining two bus routes operated by articulated Mercedes-Benz Citaro buses. Routes 436 and 453/N453 have been taken out of the 2012/3 Tendering Programme and placed into that of 2011/2.

The Mayor made quite a noise about ridding London's streets of bendy buses during the electoral campaign. This was something the incumbent mayor fiercely fought. Had Ken Livingstone won the mayoral contest, you can be assured the artics would be operating virtually unchanged from 3 years ago. We know it was Ken who said of the Routemasters: "Only some ghastly dehumanised moron would want to get rid of the Routemaster", but that was said in 2001 and since then many additional pressures were brought to bare - the possibility of making London the first capital city in the world to operate 100% low-floor buses being just one.

Services 436 & 453/N453 will be replaced by double-deckers and this will have taken place before the next mayoral election campaign, due to start in early-2012. Ken Livingstone is expected to reapply for the position, as the Labour candidate, though if all artics have been removed from London's streets by then, the decision to reintroduce them will be made all the more difficult and costly.

So far, four routes that had been worked by articulated buses have been converted to rigid operation. Services 507/521 were converted on 9 July 2009; Service 38 went rigid on 14 November the same year and the day before this announcement was made, Service 149 reverted to 'decker operation. Most amusing was the TfL press release, which claimed £1.5mil is to be saved by replacing the bendies with double-deckers.

How can this be? The 149 is using 8 more vehicles now it is bendiless than it did with the Citaros. That's 8 more vehicles on London's roads at any one time; eight more vehicles to fill with diesel each night and house. The answer soon presents itself, though. TfL has analysed passenger numbers (fewer than it assumed) and has reflected this in the contract (told Arriva they have to do it for less than they had anticipated). They've also factored in £550k saved from fare evasion, something the very same press office claimed wasn't an issue when defending the artics under Red Ken's tenure. 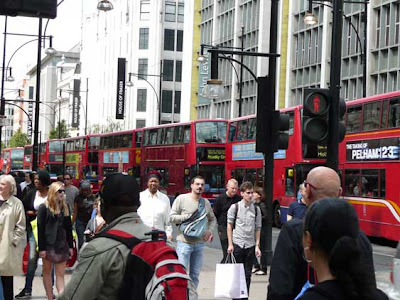 Oxford Street regularly sees wall-to-wall buses causing gridlock. Ken Livingstone introduced articulated buses which, while individually longer, required fewer to operate most services. Their removal will unquestionaby see more scenes like that above
TfL claims fare evasion on the last route to be converted, Service 38 (Victoria-Clapton), has seen a reduction from 8.13% to 1.76% - that's still nearly 2 in 100 passengers getting a free ride, despite having to pass the driver to gain access.