Work is currently underway to convert one of the lines that forms part of the London Underground (LU) network so that trains essentially operate by a computer programme, not by the drivers. This has already taken place on the Central Line and has been like it since year dot for the Victoria Line. The advantage is that human error is ruled out and accordingly, trains can be run closer together, increasing both frequency and capacity.

The Jubilee Line is the latest Tube route to be upgraded. It will perform a key role during the 2012 Olympic Games as one of the line's bases is at Stratford, which will be in the heart of the Olympic Village. Work on converting the line to automatic operation has not been as straightforward as Transport for London (TfL) would have hoped. Add to this the Tube Line's fiasco, which saw the effective nationalisation of the infraco immediately after the Tory/LibDem coalition was formed, a letter from LU boss Mike Brown to TfL has been written in which Brown says he fears completion may overrun by more than a year. Work originally was to be complete by December 2009, though now a more vague '2011' date has been given. 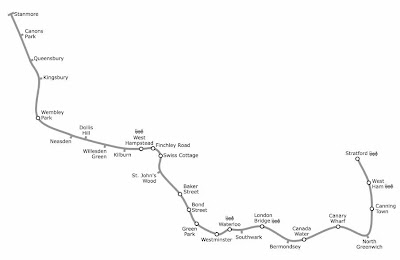 Below is a list of dates when Jubilee Line trains will not be in operation on either the whole or certain sections of line, between mid-August and the end of the year:

A Jubilee Line driver contacted the LEYTR to inform us of two interesting developments. On his first training session last month from Finchley Road, it took him and his instructor a total of four hours to travel to Green Park, approximately 1.5 milese. A 'highly illegal' reverse manoeuvre had to be undertaken, too. Complex safety-critical issues are blamed yet despite this we understand TfL is permitting passenger-carrying automated Jubilee Line trains. Notification of this is not openly made public.

Should the typical Tube passenger care, though? It's so rare the line is operational at weekends, many will surely have made alternate travel plans for the rest of the year that do not involve the route. During the week, automated journeys are taking off-peak, so that a stricken train in a tunnel doesn't grind the network to a halt. Trialing trains under normal circumstances surely needs to be done to test the effectiveness of the new system and what better way to do so than in 'live' conditions - off-peak, with passengers on board. However, our Jubilee Line correspondent told us that there have been multiple delays recorded, owing to the automation software failing on a train full of passengers in a tunnel.

So it would appear that if you're lucky enough to catch a Jubilee Line train, there is the possibility that you'll be an unwitting guinea pig.