National Express has cornered the market in transport between central London and Stansted Airport, operating the only trains and the vast majority of coach services. Initially the regulator placed a price cap on the fares charged by both modes to save any unnecessary price fixing, but that has since been relaxed.

Not that the cost of a journey between both terminals is what prompted the Advertising Standards Agency (ASA) to take action against the company's Stansted Express trains. The company has been ordered to remove all posters at Standsted Airport that "strongly implied" its trains would "reach [central] London in 35 minutes", when the end-to-end journey time takes 10 minutes longer. 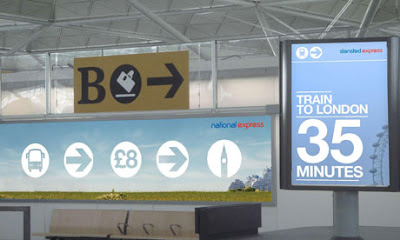 National Express said the time shown actually referred to Tottenham Hale station, on the outskirts of London, where onward connections to non-central localities can be made using any of the local buses or the Victoria Line Tube trains. What did not do them any favours, then, was the depiction of the London Eye and it is for this reasons that the ASA has banned the posters which it says: "..the simplicity of the message could potentially confuse visitors about where in the city they would get to in 35 minutes."

NX have legitimate room for manoeuvre here but they've agreed to move the posters. They offer evidence that 58% of people using the airport are visitors and may not speak English. This surely falls apart by then offering a journey time to some completely obscure station on the outskirts of a city, the centre of which is surely the vast majority of tourists' destinations.

There was, however, only 1 complaint made to the ASA about the posters.

Two complaints were made to the national media over an excess fare that was charged by South West Trains last week, which has seen more than double the level of media coverage! Both Emma Clark and Davyd Winter-Bates have caused a stir over being fined excess fares totalling £144 when they alighted a SWT Southampton-bound train at Eastleigh.

The couple were travelling using Advance tickets, costing £6 each. Their treatment appears to have split the enthusiast fraternity in two: those who regularly purchase this ticket type believe ticket barrier staff were right to charge them and those who think a £72 per-person fine when the original tickets cost just £6 is completely outrageous.

We travelled with SWT when bidding a fond farewell to the company's 3CIGs and paid £9 each way between London Victoria and Brockenhurst. The cost of the tickets was so low essentially because the risk was so high. If - for any reason whatsoever, other than the fault lying with SWT - we missed either outward or return trains on which we were booked, we knew another Anytime (full fare) ticket would need to be purchased. This is clearly written in the ticket description.

Also contained in the ticket description, under the Validity section is the following:

You must travel on the date, time and trains specified. You may not start, break and resume, or end your journey at any intermediate station except to change to/from connecting trains as shown on the ticket(s) or other valid travel itinerary.

National Express introduced this policy on its coach services offering cheap Funfare tickets to/from London Victoria that additionally call at Heathrow Airport. Essentially, passengers were purchasing return tickets to London Victoria from, say, Exeter but alighting at Heathrow - their intended destination. Returning after their holiday caused the biggest problem as drivers were rightly refusing travel. NX does not offer Funfare tickets to any of the airports it serves. As a Scotrail guard wrote last week, enforcing the Funfare ban on NX coaches is a lot easier than on the railway since bus/coach drivers check tickets before travel.

Trains have guards, true, but how often do guards confirm travellers' destinations when clipping their tickets? NX coach drivers generally need to load luggage for Heathrow-bound passengers and in so doing will inadvertently root out those who've deliberately purchased Funfares to London Victoria instead.

While SWT's officials upheld their excess fare policy (to charge twice the Standard Single fare), it did nothing to foster good customer relations. We suspect £6 singles were only available to Southampton, not Eastleigh and that barrier staff will be all too aware of those undertaking the same slight of hand (or ticket) as coach travellers to/from Heathrow.

If nothing else, the complainants' gripe being published in The Sun will ensure decent coverage of what is and isn't acceptable with these Advance ticket, irrespective of what readers may think of the couple's treatment. Others planning on doing the same now know what to be faced with - and this level of publicity SWT could not buy.