Admittedly, the airline which was founded by Stelios was not directly linked to the latest design of aircraft seating; instead it was Ryainair's top man, Michael O' Leary that could be visualised rubbing his hands together at news of a revolutionary new seating design for aircraft that could increase capacity and therefore revenue.

The new oxymoron 'standing seats' offer 7cm less leg room than standard economy class seating and have been designed solely to cram as many people into aircraft as it is legally possible. The new design is expected to be unveiled at the Aircraft Interiors Expo Americas Conference in Long Beach. 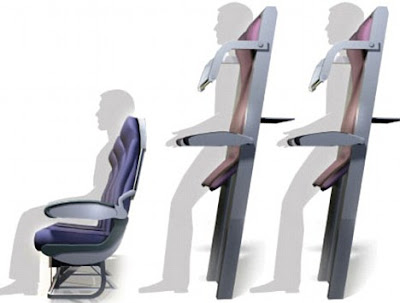 Could standing reduce the likelihood of deep vein thrombosis during air travel, though?
Italian-based designer Aviointeriors has said most interest is being shown by USA airlines, which seems a little odd since Americans are a considerable larger race than the world average. The USA is also where a very large proportion of airlines are based, so it's probably to be assumed most interest is likely to be found here. Ryanair, as we intimated, is also interested in order to maximise profits.

We'll not knock it until we've tried it, but the designers themselves refer to it as being like astride a horse, which is not an experience I'd like to consider for a two-hour flight to Europe! Director General of Aviointeriors said that the seats could become uncomfortable for flights in excess of three hours.

LEYTR Comment: Budget airlines might be salivating like a dog that's just heard Pavlov's bell, but you can be assured none will adopt this new seat design en mass. Plane travellers already undergo considerable stresses that do not apply to other modes of transport and for them to then have to effectively squat while cruising at 30,000 feet for 2 hours may be a stress too far.

The comfort of seats on buses, coaches and trains differ dramatically. The extreme bounce felt in the Mk1 carriages offer a different level of comfort to the Mallard refurbishment undertaken on the high-speed trains operating along the ECML. Both are comfortable, but for a long journey, the newer, firmer seating seems more appropriate. Modern bus seats are generally less comfortable than they used to be, although our memories aren't long enough to remember pre-war wooden slatted seating!!

The average duration aboard a bus is far shorter than other modes of public transport, so understandably comfort can be slightly compromised. Would Meagbus consider the new squatting seats for its services under 3 hours? Equipping a coach with leather seating that sees the average price per seat at under a tenner is not as cost-effective as it could be. We suspect seat belt legislation and how effective a lap belt is likely to be in this situation is why such 'advances' will not make it to road transport.

**UPDATE** From Steve, West Midlands. Like your latest post - it reminds me of my early days travelling with West Mids PTE at Coventry. I went upstairs on a Fleetline and dropped down into what I thought was a padded seat - it wasn't and it hurt. Faced with vandalism and in the days before fibreglass moulded seats, Coventry made its own. It shaped metal panels and covered them in rexine - at a glance it looked like any other seat!!