News broke on Railway Eye earlier in the week that Directly Operated Railways (DOR), the company formed by the last government to operate any train franchise that has passed into public operation, is seeking to undertake trials of Class 390 'Pendolino' trains along the East Coast Main Line. If you're not into trains, what does this mean exactly?

The Pendolino train first entered service along the West Coast Main Line in 2002. The 53 9-car trains were constructed by Alstom and are owned by Angel Trains, though leased to Virgin Trains, who has been the sole operator of this class. They are able to travel at 140mph and have the ability to tilt, enabling them to negotiate curved track faster than other trains. Only 52 sets exist now following the accident at Langrigg in 2007.

They've never operated at their top speed, however, since the West Coast Main Line upgrade was downgraded in part to prevent the cost from spiralling out of control and to ensure completion did not overrun even more than it had already at that point, so a maximum 125mph running speed was maintained and not improved upon. One Editor took a trip aboard a Virgin Pendolino last autumn and the account can be read here.

Two years ago, the Department for Transpor (DfT) requested the 9-car Pendolinos be lenghthened with the insertion of two new carriages per set and up to four new 11-car units. Alstom undertook the work, which is currently ongoing, and whoever wins the West Coast franchise from 2012 will have the task of introducing the new carriages and complete sets to the route. Many carriages have been completed to date and are effectively sitting idle. We understand that despite this, the DfT has not officially approached Virgin Trains, asking them to introduce at least the carriages, ahead of schedule. 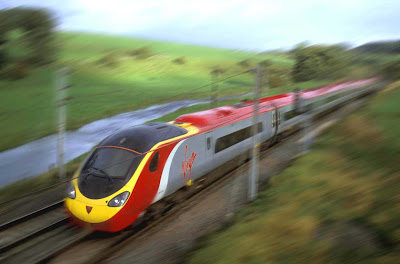 There are currently 52 9-car Pendolinos in use with Virgin Trains along the West Coast Main Line. Most of these will be lengthened to 11-cars by 2012, plus be joined by up to four new 11-car sets, though at least one could stray to the other Anglo-Scottish route if DOR gets its way
There is a chance that Virgin Trains may not retain its sole franchise come 2012 so you can see their reticence at introducing new carriages to a decade-old rake and the compatibility issues this is likely to have and the net effect this will have on performance and reliability in the run-up to their franchise negotiation. They'd need at least a financial incentive or greater leeway when reporting train failures directly attributable to compatibility issues.

Enter the DfT-controlled East Coast Railway, operated by DOR since National Express defaulted on its East Coast franchise last autumn. Seemingly without warning or prior notice to either the DfT or as courtesy to Virgin, a press release was issued stating that an additional journey to the planned clock-face timetable for the ECML is a Glasgow-London King's Cross journey to be operated by one of the in-build new Pendolino sets.

Glasgow does not form part of the ECML clock-face timetable, which sees Edinburgh being the most northerly terminus, save the Inverness and Aberdeen HST extensions. Glasgow omission was supposed to be covered by alterations to Arriva's CrossCountry franchise, though we understand that Arriva has yet to be officially approached regarding this. With Glasgow-King's Cross trains to become a thing of the past from May next year, the introduction of a once-a-day return trip would possibly placate those Glasweigans annoyed that they will no longer be able to travel directly to places such as York, Peterborough and Darlington.

Under the plan, East Coast would take delivery of the new train in July next year. East Coast would operate the Pendolino in daily passenger service, principally between London and Edinburgh, for a period currently estimated to be nine months. The new 11-car Pendolino forms part of an order for four such train-sets. Alstom started work on the new order in early 2009.

We've been told that the new Pendolino carriages and complete sets wear the standard base livery applied to the existing ones but have not been treated to any decals or logos since most are officially to enter service following the West Coast franchise renewal, which could bring a change of operator.

Some Pendolinos are up to 50% less reliable than the electric Class 91s used by East Coast on the ECML today and will take considerable time to train drivers and other crew members. Originally, Pendonlinos caused problems with signalling equipment on the WCML when they were introduced, something which could occur along the ECML. We've also learned that while the new versions will be 11-cars as standard, they are only marginally lengthier than the Class 91s with 9-cars and a DVT that are used today, so capacity gains will be negligible.

Some see the DfT picking a fight with Virgin by instructing DOR to make use of the trains, rather than allowing them to sit idle when capacity issues are a major concern for voters, er, passengers. They'd perhaps prefer Virgin to introduce them as a goodwill gesture before the franchise ends. East Coast's trial would only be for 9 months and then the West Coast operator (whoever that may be in 2012) would have it back.

Perhaps the biggest concern voiced by most in the industry is that of cost. How many millions (it always ends in millions!) will be spent trialing the Pendolino along the ECML... Integrating it with the standard provision offered by East Coast's Class 91s and HSTs... training drivers and crew... modifying stations... All for just 9 months. Residents in Lincoln would much rather they simply not bother and re-instate their promised 7 daily trains to London instead.

Aside from the obvious cost of training which indeed would be high. A Pendo' would offer enhanced acceleration and, with a fleet, justify installation of trackside balise for tilt function. This is probably the only way another 5 to 10 minutes might be knocked off the KX-Edinburgh schedule. I still think this test will happen, just possibly sooner rather than later as IEP is a long shot and seriously expensive.