With news that First was to sell its only freight arm last month, a buyer was recently found - Europorte France, who has purchased GBRf (GB Railfreight) from the UK's largest transport operator in a deal worth £31 million.

Europorte France's parent company, Groupe Eurotunnel, is currently one of two freight operators between England and France through the Channel Tunnel. Unlike their competitor, DB Schenker, they're restricted somewhat by regulations here in the UK and our non-standard track gauge, to only providing services to/from Folkstone. With one of the UK's rail freight company's now in its fold, the possibilities of expanding service north of the White Cliffs is a very real possibility.

Eurotunnel described the UK rail freight market as one of the most developed in Europe, seeing annual growth over the last 15 years of 4%. GBRf received a £56 million turnover in 2009 and was described by Eurotunnel as a profitable business, employing 299 people. It's a credit to First that they continued to ensure this oddball in its pantheon continued to perform well.

Eurotunnel's long-term ambition is to grow its presence throughout Europe. It's a key player on the continent and with a foothold in the UK, it will be much easier than virtually all other freight providers to link the two together. It actually charges DB Schenker to use the Tunnel - charges DB has stated on record on many occasions as being too high. Eurotunnel will find itself charging its own freight operation the same fees, too, and if it chooses to reduce them, will find that this benefits its main competitor. 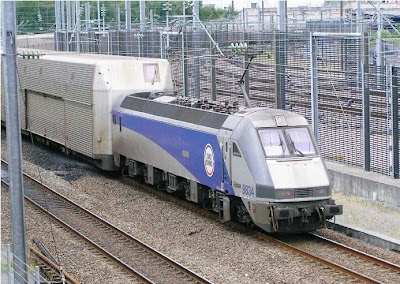 Only Eurotunnel is currently permitted to convey ad hoc road transport between Folkstone and Calais through the Channel Tunnel. DB Schenker transports traditional rail freight, but could have competition on its hands with Eurotunnel now owning GBRf. Channel Tunnel access charges may be reviewed, too
The government is planning to sell-off High Speed 1 sometime soon, to realise quite a few millions for its coffers and with it comes the possibilities of other passenger services operating through the Channel Tunnel - who'll also have to pay the set fee per passage as defined by Eurotunnel. Pressure will be on to ensure this level is set at one conducive to all operators. At least with the company who sets the charge likely to see first-hand how exorbitant this charge can be, a reduction could see many more freight companies opting to use rail into Europe and this can only be a good thing for the rail industry as a whole.