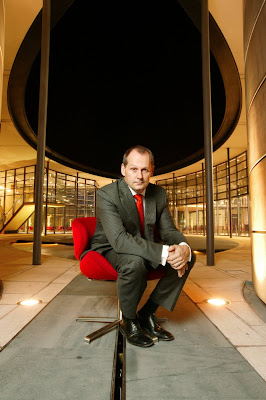 News broke yesterday that Network Rail's (NR) chief executive Iain Coucher is to step down from the post he's held for three years. Coucher, who had been with NR for 8 years in total, was latterly seen as one of the main protagonists for NR's bureaucracy overload, was recently heralded as one of the highest-paid civil servants in the land, receiving a combined annual salary and bonuses of £1.24 million.

We wonder if his successor will be availed of a similar salary? The DfT goes to reasonable lengths to remind us that NR is a self-contained, arms length, not-for-profit organisation that it has very little to do with, yet includes the savings NR will make as part of its £680 million cost-cutting measure. With talk of all NR Board's bonuses being withheld each and every year a member of its 35,000-strong workforce is killed in an industrial accident, further savings could be made here - and will be reflected in the chief exec's salary, too.

As part of the austerity measures - specifically the DfT not wanting to spend lots of money on new trains, as had been promised by Lord Adonis - Lincoln, in the heart of the LEYTR area, will not now receive its two-hourly direct train service with London, following news that it's been effectively dropped. One direct train will operate to/from Lincoln-London each day, with resource found within East Coast's (EC) existing fleet. This will save an estimated £9mil a year on top of the price tag for five brand new Class 180 'Adelantes'.

It was interesting to note the press release referred to there being two direct Lincoln-London services from May 2011: one the new EC route, the other the existing East Midlands Trains service that takes longer than changing trains at Newark!

But the timings don't give very good connections at NNG to the London trains . . . think that it's almost incidental that the buses go to the station at Newark!

The hourly bus service links nicely with the trains. 3 trains per hour call at Newark to/from London currently and the new X3 Executive Connect, with its leather coach seats actually waits time at North Gate, rather than the town centre, which in itself speaks volumes, I'd say.