This time we bring you news of bus-style conductors - making a resurgence no less - in Swansea, following First's introduction of its ftr bendy-buses there last September.

Even if your too young to remember conductors on board the buses, trams and trolleybuses in your local town or city, you're sure to have a good idea what one is. After all, they still exist in London, albeit on two heritage routes, and are effectively the bus equivalent to those that patrol the trains today. 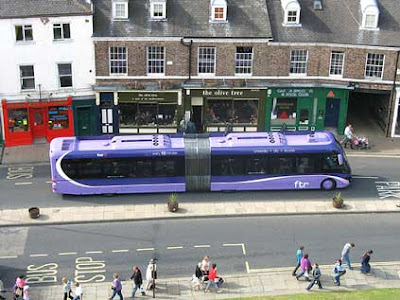 They're 60 feet long and have been designed to replicate the look of a tram
(Photo: Steve Montgomery)
First introduced its ftr (text-speak for 'future' apparently) brand in York on 8 May 2006, which saw a fleet of articulated Volvo B7s with Wrightbus StreetCar bodies link the city centre with the university, Acomb and Dringhouses. The idea was (and still is) straightforward enough - offer passengers a service that emulates that of a tram, but affords the operator the flexibility (and cost efficiencies) that comes with a manoeuvrable standard PCV. High-capacity, high-frequency, tram-like buses that operated along major population corridors. 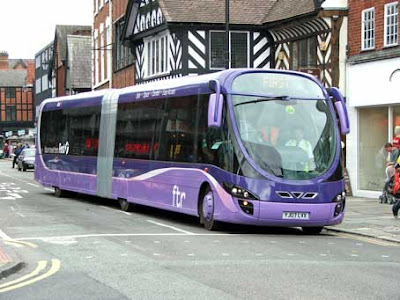 A very rare shot of a ftr is seen here - in Chester.
Other ftr hot spots soon followed, with Leeds and Luton being two places that saw operation of this kind. Luton's linked the airport and was short-lived, now ceased, with the vehicles moving to South Wales for the newer Swansea ftr service. They weren't universally welcomed in South Wales though - not least due to £10mil of infrastructure alterations needed before the fleet could operate there.

Like York, Swansea's service started with tickets purchased at ticket machines at bus stops - the ftr driver (sorry, 'pilot') would simply drive. Problems soon occurred in York with new passengers simply at a loss as to what to do. Hurriedly, First introduced 'customer hosts' to the route at considerable cost and to this day they are still to be found on board. Swansea has also opted to introduced customer hosts, though First Cymru has cleverly placed a positive spin on developments therein by ensuring its hosts perform more than just a ticket issue/inspection service - they're to be trained as tourism guides, too. 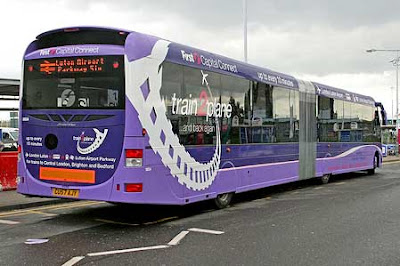 The short-lived Luton-Luton Airport service aimed to transport large number of air travellers though wasn't as well patronised as First hoped.
(Photo: Gerry Ward)
But isn't this what conductors traditionally always used to do? Back in the '70s it was commonplace to ask the conductor of your bus for directions or information about other bus routes. No third-party tourism company got involved. First, however, should be congratulated once again for putting its money where its mouth is and paying for the hosts to be visible on its ftr services. The company must surely top the list of bus operators employing the greatest number of customer hosts/conductors in the UK today (calling them 'conductors' could be counter-productive: the hosts might stake a claim for an increased rate of pay). 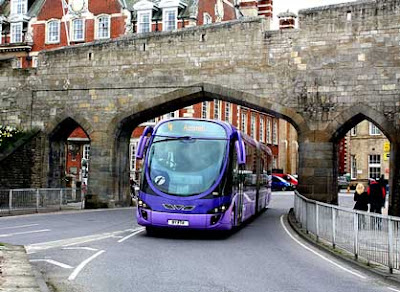 The original ftr service commenced - and continues to operate - in York. First was recently criticised for removing the ftrs from evening journeys and using one-man-operated standard buses instead, as a cost-saving measure
Reassurance to the public is something that wasn't mentioned in First Cymru's press release on their newly-qualified ftr tourist guide hosts, yet is clearly a massive bonus to passengers - especially the elderly and more vulnerable, who are sure to choose ftr over other operators' services simply because of the clear and visible presence of a member of staff - be he/she offering his/her opinion on the latest release at the cinema or not.