The LEYTR Editors managed to bag a ride in the cab of a Class 395 Javelin, operating with Southeastern on its new High Speed service linking Central London with Kent, travelling at speeds of 140mph. To read part 1, click here. Part 2 is below.

We left the action having emerged from Tunnel 2 and were currently running parallel to c2c's Tilbury Line. Our speed was increasing now to the fastest we'd attained so far. Our driver said that under normal circumstances, the first opportunity to reach the top speed of 225kph (140mph) is as the train passes the Wennington Crossovers. Our driver duly obliged and we were now hurtling along HS1 covering 1 kilometer every 15 seconds. I even managed a crafty shot of us travelling at 226kph (141mph), and afterwards asked our driver what the situation is with overspeeds. Apparently, up to 3kph over is acceptable, though any more is recorded and the driver is required to explain all to his manager. 7kph over and an emergency brake application is made. 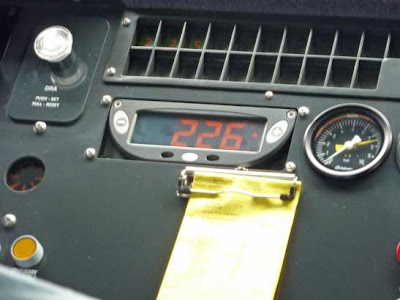 Top speed + 1
It had taken us 12 minutes to reach our maximum speed and while part of me was a little disappointed we weren't cruising at 140mph sooner, we had made a stop at Stratford. Our driver said that the Javelins aren't as powerful as he'd hoped and on some inclines he needs to have the throttle open fully and despite this, progress is painfully slow. He was also of the opinion that the trains performed better when drawing their power through overhead lines rather than the third rail, used on the classic lines. On paper each motor car has 4 motors and there are 4 motor cars rated at 210kW. This is a total of 3360kW or 4500hp. This gives 16.3hp per ton making this train the most powerful EMU in Britain. By comparison Virgin's Pendolino trains have 14.6hp per ton but don't have to deal with long gradients of up to 1 in 40 on HS1.
It now began to rain and the double wiper blade came into its own. When travelling on a bus, averaging 20mph, rainfall always looks more severe owing to the manner in which the bus is driving into it; travelling many, many times faster than this sees even the lightest shower pummel the windscreen to the point that visibility is significantly reduced, and a second wiper blade, mounted to the same arm but parallel to the existing blade, ensures as much rain water is removed from the windscreen per wipe. It seemed very effective.

Our speed was now reducing as we approached Tunnel 3 - Thames Tunnel, the other side of which is Ebbsfleet station. From here connections are possible using the award-winning Fastrack bus services. With the Dartford Road crossing visible to our right, the TVM beeps and flashes 200. Our driver applies the brakes are as we enter Thames Tunnel, approximately 2.5km long. There is a 1 in 40 descent into the tunnel followed by an equally sharp ascent which aids our braking down to below the 100kph required for our approach to Ebbsfleet. We pulled in just 17 minutes after departing St. Pancras.

These almost-unthinkable journey times are what high-speed train travel is all about; they are what spur the political parties on - all clamouring to offer this revolutionary mode of travel within the next generation. Unlocking the commuter potential in this part of Kent - where commuting has taken place since year dot, but now revolutionised (at a cost, it has to be said) - is nothing compared to the possibilities of linking much larger settlements with London. Thousands could conceivably commute to London from Manchester each and every day. We were both now witnessing first-hand just what a revolution High Speed is - even to a small, densely populated island such as ours. 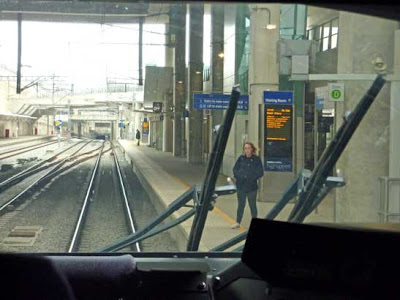 Welcome to Ebbsfleet
Our driver checked the 24 CCTV cameras that covered the carriages as well as offering vision of those boarding from the platform, before closing the doors and proceeding. The door system is identical to that in use on the Japanese Shinkansen or Bullet Train and has over 40 years of operational experience and development. Conveying large numbers very quickly has overridden aerodynamicity here, too, with the doors not flush to the outside body shell, but set back slightly in order to slide open and close as fast as possible. 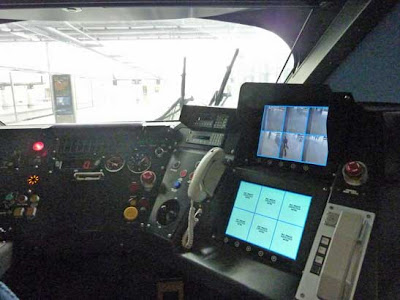 The top monitor controls all CCTV cameras and the driver and switch between all
We've covered the downgrading of a guard/conductor on this route in a previous blog entry, and even managed to publish a Train Manager's opinion of it all in the subsequent days. To those outside the rail industry, £25k a year to just check tickets with no worries about anything else could seem a very cushy number; to others - namely existing guards/conductors - it's the start of a slippery slope, that will see many similar moves be made to downgrade their roles and to make them no longer safety-critical. ScotRail faced strikes last month over this very issue.

As we gained speed with gusto, I remarked that we'd not passed any Eurostar trains so far. Our driver explained that between 1200-1400 there is a purposeful lull in these sub-Channel services, known as a 'white period' that enables engineers to check the line. Obviously this period has been made a little bluer now, with four trains per hour in each direction being added to the mix. 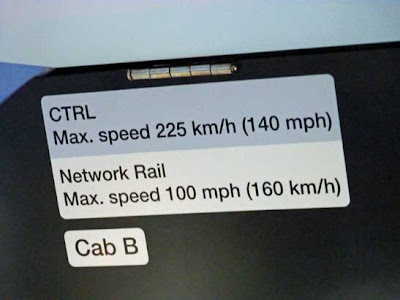 In case a reminded is needed, drivers are made aware of the maximum line speeds along the sections of route operated (CTRL = Channel Tunnel Rail Link, aka HS1)
Ebbsfleet is 20 minutes away from Ashford, which is where we'd be leaving the service. South of Ebbsfleet is also one of the steepest gradients on the line, and running at maximum speed, our Javelin - 395114 - laboured up the incline, seeming to level out at 170kph (105mph), rising to 196kph (121mph) by the top.

Our restart from Ebbsfleet is rapid. Full power is applied to 95kph and not long after the TVM shows 160 and full power is applied again. The line now rises steeply - initially at 1 in 60, increasing to nearly 1 in 40 as we approach Singlewell Freight loops. The gradient eases here to 1 in 260 and allows our speed to reach 175kph (110 mph). Incidentally, we had just passed Southfleet junction where Eurostars are permitted to increase speed from 230kph (143mph) to the full line speed of 300kph (186mph). Our speed increased dramatically after the apex had been passed and we shot up to the maximum 140mph almost immediately. We literally flew across the Medway Viaduct, parallel to the M2 - this decline (Blue Bell Hill) enabled trains to increase their speed by 10kph without any need for additional acceleration. We were drawing 2000 amps of current at this stage and shot through (what I refer to as) Tunnel 4, the North Downs Tunnel. 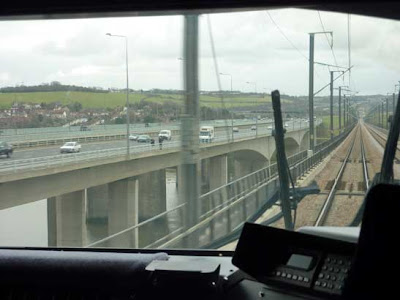 Crossing the Medway
We now cruised just under 140mph while alongside the M20 and we both received a reality check of the speeds at which we'd been travelling. Facing forward never affords a traveller with the same experience of speed as facing sideways. While stood next to the driver was an amazing experience, I personally hadn't fully appreciated travelling at twice that permitted on our motorway network. To our right we say Porches and BMWs travelling at half our speed. The sight of a Eurostar travelling at 186mph along this stretch must make motorists feel even more impotent.

We passed through Boxley Tunnel - an unnecessary structure, built as a result of wealthy land owners' fears about the blighted landscape they could face. Hansard reading from 1994 illustrates this well. The 70km milepost passed us by and we'd covered the distance in 20 minutes. This translates as an average speed of 129mph. Eurostars are expected to travel at the line's maximum permitted speed here - 300kph (186mph). This marker also heralded the beginning of the longest, flattest section of HS1, where the Javelins would be brake tested when new. Trains departed Ashford station, headed for London, and would attain their top speed as soon as possible before all brakes were applied along this stretch. Trains would stop after 48 seconds and over a distance of 1.5km (0.9 miles). While a mile may seem a very long period in which to bring a train to a standstill, we both felt it impressive, considering the speed travelled and overall weight of the train. 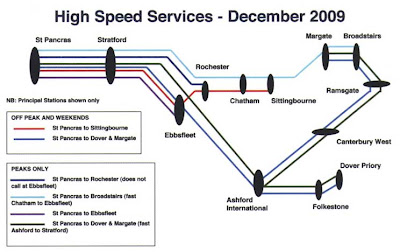 In a rather macabre fashion, our driver said that with the stopping distance being such, if he saw anything on the track while travelling at 140mph, he'd simply apply the brakes and pull down his sun visor so he wouldn't be able to see the point of impact. The Javelins don't have the luxury drivers are afforded in Class 185 Desiros, that sees their cab door open, enabling the driver to run out of the cab into the main carriage, should he spot a disaster ahead. Staying in this melancholy vein, we now passed under Westwell Leacon Bridge, the scene of HS1's only suicide fatality to date.

We began to slow in order to leave HS1 for Ashford. We were shown Platform 5 routing ahead and as we moved onto the spur line, our driver said that only on one occasion so far had the points been set incorrectly and a Javelin headed in the direction of France, though this was not the fault of the driver! At the top of this branch is where the Electronic Train Control System ends and signals are given by the more traditional lineside structures with their coloured lights. Overhead line equipment is still required as we pull into Ashford station, with the switchover to third rail operation taking place at the station itself. 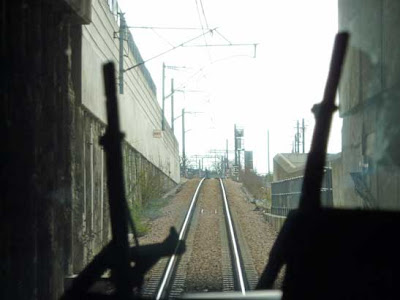 We ascend the spur that heralds the end of pantograph operation and commences that of third rail. Lineside signals also recommence, too, with Ashford station in the distance
We arrived at Ashford International precisely 37 minutes after departing St. Pancras - perfectly punctual. It was a very memorable experience and despite not gaining a special High Speed tie, neither of us left downhearted. Obviously we'd like to thank our anonymous driver (who continued to Ramsgate) and look forward to undertaking another journey in the future.

Both parts of our Easter Spectacular have been uploaded to the LEYTR's new-look storage blog, The LEYTR Jaunts.