Amidst news that the detailed feasibility study into a high-speed railway line for England has been reported, a quieter revelation was made, that the deal done with Agility Trains for Hitachi-built inter-city express trains may well have been scrapped. Lord Adonis has instigated a bureaucratic government review into the Intercity Express Project (IEP) to test its VFM (value for money credentials).

The scheme, announced just over a year ago, was valued at £13.9 billion and would effectively replace all High Speed Trains (Class 43s - 'Intercity 125') with the first entering service from 2013. The electric Class 91s, that were known in BR days as 'Intercity 225s' would subsequently be replaced, being cascaded elsewhere. We recently suggested the Midland Main Line, should this route be electrified. These Super Express Trains would be in a mixture of either five-car or ten-car formations and would be capable of being powered by electricity and heavy oil. Virtually all trains would operate along the Great Western and East Coast main lines. 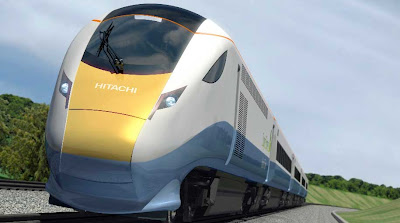 Agility Trains' Super Express Train, seen here, is intended to replace all Classes 43 and 91 from 2013, though the Transport Secretary would like the Intercity Express Programme to be looked at again, to ensure it offers value for money.
Now, the Transport Secretary has asked Sir Andrew Foster to examine the IEP's costings against cheaper alternatives, such as further re-vamps to existing trains and the purchase of additional carriages. The study will take around three months. If the IEP is seen as continuing to offer value for money: "my intention would be to proceed with the project in the next parliament," Adonis said.

LEYTR Comment: While some feel this is effectively the cancellation of the IEP, others choose to look more positively on Lord Adonis' decision. Hitachi, who'd build the trains, apparently relish the opportunity to discuss their Super Express Train design and to prove unequivocally that it offers value for money. It could be that Lord Adonis has made a very clever move: it is clear now that the £13.9 billion deal was never going to be signed-off before the forthcoming general election, and amidst the dire need for spending cuts in the immediate aftermath, the Conservative Party - should they form the new government - were widely expected to cancel IEP without a moment's hesitation, citing poor value for money when compared to a second mid-life refurbishment. Now, however, the scheme is untouchable for three months while Sir Andrew Foster devours its minutiae, and should he recommend the scheme does offer VFM then its cancellation at the hands of the Conservatives come June would surely also come with a decent level of criticism, too.