Something in the air!

British Airways' (BA) cabin crew, on Monday, voted in favour of strike action by a majority of 7,400. The reason BA's workers feel the need to take action against their employer is the same as in December, when they first attempted to strike: pay and conditions.

BA has enforced a pay freeze across its entire workforce and even go so far as to request that its workers go without remuneration for a self-defined period. Directors have refused bonuses, cabin crew on board various flights have been reduced in number and yet despite this, BA's balance book makes very gloomy reading: for example, its pension 'black hole' is financially greater than the entire company's worth. With a strike likely to cost BA in the region of £12 million a day, the company's response to its cabin crew is that any strike action could have a far-reaching effect on BA's very survival. But with 81% of the balloted 9,200 employees willing to take action, is there any chance of disruption being averted?

Well, no date(s) has/have been set at the time of writing and disruption over the Easter period has been ruled out by the unions - who are no doubt responding to the huge public backlash when strike action had been penciled in for last Christmas. Both sides say they continue to talk to each other and everyone - from bosses to employees and travellers - will be hoping a satisfactory outcome is planned.

Meanwhile, First ScotRail's drivers, conductors and sleeper train managers staged a 24-hour strike on either Saturday or Monday. Further one-day strikes are planned on 1 & 13 March. The sleeper trains were disrupted from 2000 Monday night, with managers there striking until 0800 yesterday morning. Pay is not the catalyst on this occasion, but changes to employees' job descriptions. 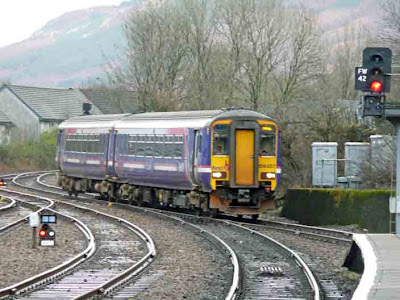 Strike action had an effect on services to and from Fort William - a locality no further away from the disputed Airdrie-Bathgate line than Bristol is from London (118 miles).
With the forthcoming Airdrie-Bathgate link soon to be completed, ScotRail wants to instigate Driver-only Operation (DOO) along this new route's metals, thus saving the need for a guard/conductor. The unions claim this compromises safety, with just one person - completely separated from the entire train - in charge of door operation and overall well-being of everyone on board.

ScotRail - and more recently Southeastern - didn't used to be permitted to simply rid their trains of guards. Even during the first few years of privatisation, the necessity for a train guard to have overall responsibility for the train's safety was encrusted in the 'railway rule book', though dropped by Railtrack thanks to lobbying by the Train Operating Companies in 1999. In Southeastern's case, a 'train manager' is present on each of its high-speed Javelin trains, though simply check tickets.

The financial savings from the instigation of DOO on the Airdrie-Bathgate line is believed to be £320k a year, which the RMT union is keen to point out falls way below the £429.2k paid to ScotRail's top-earning director last year. 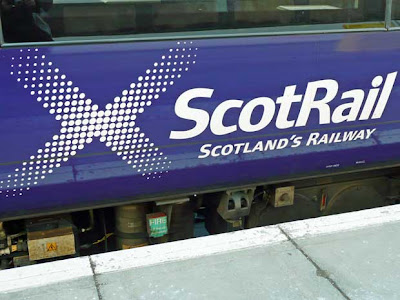 Seen here at Inverness during February 2009 is the new-look logo and all-over blue livery that is steadily being applied to all ScotRail trains.
We suspect that the unions are after a short-term all-out assault on ScotRail to force sufficient damage before the company can clarify anything with the High Court. As you'll remember in December, BA cabin crew had to cancel their period of strike action over the Festive Period as it was deemed illegal. Should those in the Far North with single-figure train numbers per day suffer following an issue in the lowlands?

Further strikes could take place next month when all Network Rail's South Wales signallers, the company's entire maintenance workforce and London Midland's employees are all balloted for strike action. There is the potential for a very gloomy period ahead.