Those working in the railway industry will know all about them, but for those outside of it, many will be unsure of what a Headcode actually is. Some may never heard of a Headcode at all. We've had a rough idea of the basics surrounding what Headcodes are and how they're applied to train services on mainland Britain, but delved the online depths further following a short piece in the forthcoming LEYTR Magazine, published at the end of this month.

Traditionally, Headcodes or Train Reporting Numbers, were displayed on the front of all train services until the start of 1976. Today, a small number of train services in Britain continue to display a Headcode, though not as prominently as they once might have. London Underground's network displays Headcodes of sorts, though these represent specific vehicle diagrams. Headcodes are unique to particular journeys, not an individual train's day's worth of traversing the country's rail network.

Headcodes are still a part of the modern railway network as they provide everyone therein with an immediate four-digit reference that identifies each and every train; its type; its priority; its destination; and often the time of day the service is operating. The specific route the train is taking is less known through the use of a Headcode, but for a four-digit reference it conveys a great deal.

The four digits can be broken down as follows: the first identifies the type of train service and its priority; the second broadly details the train's destination; and the remaining two being a unique reference to that train, generally the lower this number, the earlier in the day the service will operate.

An example being 1S15. This shows that the train is an express passenger service and accordingly priority will be given; that it is heading to Scotland and, broadly, the service is operating during the first part of the day. The Headcode usually refers to East Coast's Highland Chieftain service between London King's Cross and Inverness, departing the Capital at 1200 and arriving in Inverness at 2040. Clearly the service is regarded as express; that its destination is Scotland; and that for express departures from King's Cross, is likely to be the fifteenth of the day.

The first digit can show a number from 0 to 9, each referring to the train service operated:

The second digit - the only letter in the Headcode formation - covers the destination region to which the train is headed. These have changed over time and Scotland has its own versions (see later). For England, there are seven regions, each with its own headcode. These apply for train services travelling between these old British Rail regions and are as follows:

It is claimed that the North East Region was disbanded when Headcodes were no longer displayed on trains (1967) and while this might have been the case, the letter N still very much exists to refer to said region. Trains within these seven regions were at liberty to use the remaining letters of the alphabet to identify places within their region. For example, within the London Midland Region, A is used to refer to London; G for Birmingham; and H for Manchester.

Q is used to denote Network Rail's Measurement Train; X refers the Royal Train and has to be manually routed by signallers; and Z denotes trains not operating normal services, such as charters and railtours. 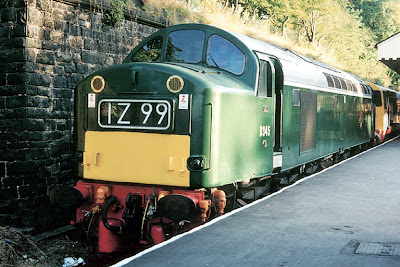 The Class 40 seen here has a Headcode displaying 1Z99 - an express charter train.
The remaining digits show a number between 00 and 99 that are unique to that working at that time. Taking an example from the LEYTR area, the East Midlands Trains service from Newark North Gate at 1924 to Cleethorpes for 2102 had a Headcode of 2T59. Clearly the 2 refers to this train as an ordinary passenger service; T is the letter given to the Newark-Grimsby/Cleethorpes service; and 59 is the unique number applied to that train. Interestingly though, 2T59 is used more than once in the same day: within England it refers to an earlier Chingford-London Liverpool service, then a later Bedford-Brighton Thameslink train; followed by a Heathrow Airport T123 to T4 train and finally a Paddock Wood-Strood service. At no point do two trains with the same Headcode run at the same time.

Within the LEYTR area, Headcode letters appear to refer to the following:

For Scotland's Headcodes and their subtle variations, we suggest clicking here to be taken to the excellent Scot-Rail website. All London trains, for example, are allocated the letter E in Scottish Headcodes.

MY NAME IS BRIAN

i am a fan of the british railways two number headcodes.

when replying to me can you do it in upper case please.