We've heard credible accounts that the largest independent bus operator running into Derbyshire has been sold with effect from 1 January 2010. From this date, Halfway-based TM Travel will become part of the Wellglade Group, better known for their Trent Barton, Blue Apple and Kinchbus operations.

TM Travel has seen impressive growth over the past decade-and-a-half, starting with just one coach in 1995 to well in excess of 100 today. The fleet initially comprised a majority of coaches, though latterly this has disappeared in favour of buses. Most services operated do so for local authorities and PTEs, rather than commercially. The firm's first commercial routes were the Bolsover town services. The extent of their operation is vast, with routes as far north as Barnsley (Service 7 - Hoyland Circular), to Derby in the south; from Manchester and the Peak District in the west to Worksop and Doncaster in the east. The operation is the most dense in north-east Derbyshire where TM Travel are the dominant operator of school and tendered services.

It is here that they made a purchase of their own a few years ago, adding independent Thomson Travel to their operating, acquiring a key Chesterfield-Sheffield service. Numerous vehicles currently retain the all-over red livery of Thomson Travel, though run under the TM Travel name. 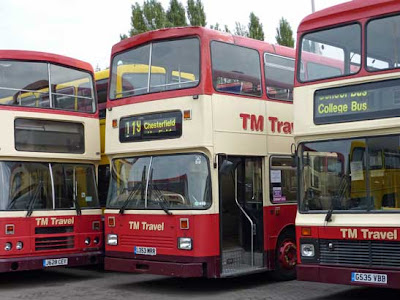 A large number of school and college tenders are operated by TM Travel, using ageing double-deckers of many types.
It is said that when Killamarsh-based Aston Express planned to withdraw from the bus market in August 2004, Stagecoach hurriedly set up its own parallel operation based at Chesterfield to permit the smooth transfer of services and employment for Aston Express' drivers, while at the same time ensuring the business wasn't snapped up by TM Travel, as had previously been the case with Thomson Travel. 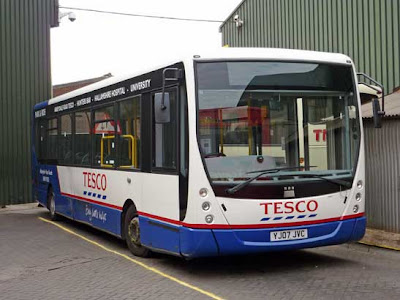 With tendered services representing the majority of its services, many therefore, adopt the livery of the company using TM Travel - in this case Tesco. TM Travel have a few contracts for the hypermarket company, this example being used to transport passengers to/from the Abbeydale store in Sheffield.
Therefore, if TM Travel's recent sale is confirmed, its purchase by the Wellglade Group could represent more a strategic purchase than anything else. With the vast majority of services being tendered, there will be limited opportunity for the company to apply its special magic as it does to its award-winning Trent Barton company. TM Travel operates numerous services in and around Matlock and into Derby at weekends and during the evenings and the prospect of a much larger company running these services by default, to then consider commercial expansion here - especially the Erewash area of Derbyshire - wouldn't best suit the Trent Barton business.

It also means that the Wellglade Group's operation will include the high-profile FreeBee service in Sheffield city centre and will help the Group achieve what it wanted to prevent others from doing in its own operating area: getting a foothold in South Yorkshire. 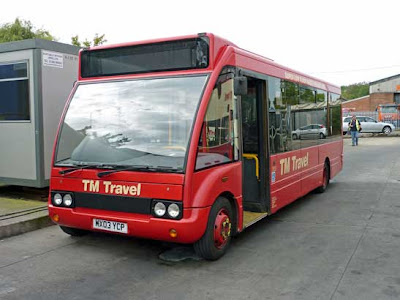 Some vehicles wear an all-over red livery that is to represent the livery of an acquired operator - Thomson Travel. Vehicles wearing this livery generally operate in the traditional Thomson Travel operating area.
Latterly, TM Travel had problems of its own, being required to attend a public inquiry before the Traffic Commissioner, timetabled for last month, with one of its Optare Solos being involved in a fatal collision near Rotherham in the summer. VOSA had also found a problem with their O Licenses (they, due to a technicality, had too few following the retirement of one of their founders) and so had to call on Veolia to borrow a dozen or so O' Licenses. With authorities having to cut back during a recession, the prospect could be looming of reduced tenders/reduced income from existing tenders, so now may be a good time to sell. The proprietors have excellent links with the enthusiast fraternity and, while obviously wanting to get the greatest financial return for their company, would have balanced this against what they (and others) see to be the best all-round deal. (GL)