My introduction to railway fares and service expert, Barry Doe, was ironically through the bus industry, namely BUSES magazine, where during the 1990s he ran what was a popular column called On The Map in which he reviewed maps produced by the varying bus operators up and down the land. While OTM has long since gone, Barry's interest with cartography in the transport industry has continued.

For the past few years, he's produced a map of his own, one that shows train operating companies and the lines which they serve. The latest, fully revised 14th edition can be viewed on his website, though acquiring your own copy means emailing a company called Map Marketing. All editions since the first, produced in 2005, are archived in pdf on Barry's site. 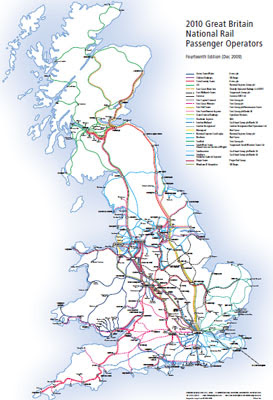 The latest edition removes NXEC in favour of East Coast Rail; shows Southeastern's Javelin operation along High Speed 1; the removal of SWT west of Exeter; the removal of London Midland between Worcester-Gloucester; the closure of the Oldham Loop; and Arriva Trains Wales' services between Manchester-Manchester Airport have been included. (GL)