When I heard that news of Stagecoach's offer to merge with ailing National Express Group (NEG) had been declined, I did think to myself "Brian won't be happy!" Literally hours later I read that Caerphilly County Borough Council (CCBC) had recently agreed the sale of its municipal undertaking - the smallest council-owned bus fleet in the UK - to Stagecoach, who will acquire the Islwyn Borough Transport (IBT) bus company, subject to approval from the Office of Fair Trading (OFT). 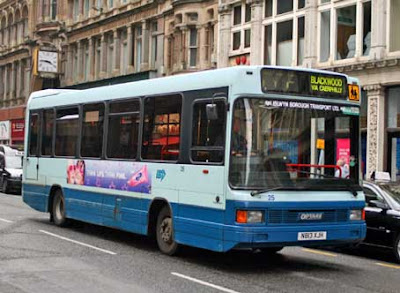 They're the smallest council bus company in the UK - seen here is a MAN 11.190/Optare Sigma, new to Reading buses 13 years ago. N813 XJH is currently one of the mainstay of IBT's ageing fleet.
While this wasn't the case (CCBC decided to sell IBT two days before NEG said 'no'), I did have the delicious thought conjure in my mind of a certain Scottish entrepreneur, so angry at the prospect of being unable to control buses in Brum, that he threw a few coins from the bottom of his pocket in the direction of CCBC who, to his astonishment, took him up on his offer.

Clearly, Stagecoach do not enter into any purchase lightly. CCBC's press release for the sale of their bus company confirmed a sale to Stagecoach had been recommended, pending OFT approval and that negotiations with the company had been 'extensive'. They were also keen to point out that Stagecoach's 'extensive track-record' in the local area meant that residents in Caerphilly would receive the best-possible deal." The fiasco over the sale of council-owned Chester Bus a couple of years ago will have ensured the value-for-money slant was heavily played, not to mention councillors' desires to remain elected throughout the coming year!

Not included in the sale was IBT's coaching unit, that was sold at the start of the year, including its trading name: Kingfisher Travel.
If you're more a railwayman or have a very loose interest in the bus industry, you may be forgiven for wondering why you've never heard of Islwyn Borough Transport. The small council undertaking operates 11 routes based in the small Welsh town of Blackwood, that resides in the borough of Islwyn that forms part of CCBC. An equally small coaching unit named Kingfisher was also operated until the start of this year, when it was sold, lock, stock and barrel, to Diamond Coaches, along with its trading name. The coach business started to be scaled back just over a year ago, with Edwards of Llantwit Fardre purchasing four vehicles last September. 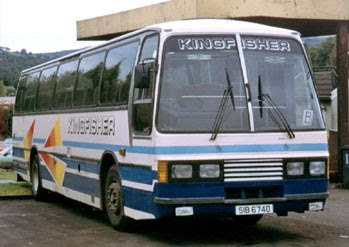 Seen here is a coach typical to the Kingfisher fleet until recently: a Duple Laser-bodied Leyland Tiger.
At last count, IBT had 47 ageing vehicles, all municipal in nature; quite frankly, it is astonishing the local authority didn't sell the business many years ago. How it lasted in its current state for over two decades in the privatised industry is a combination of will and grit and determination on behalf of its owners. Expect the most of the fleet to be replaced within the first year of Stagecoach ownership. Hopefully someone will put aside an IBT tie for me (email the editors if you have one to sell)! 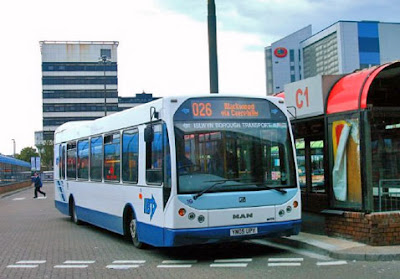 One of the newest vehicles in the fleet is pictured here, a MAN/East Lancs Myllennium seen leaving Cardiff bus station en route to Blackwood.
Not so easy to replace is the entire fleet of NEG, not that much of it needed replacing, though Stagecoach won't get chance now, following NEG's rebuttal of its offer. As announced on 28 October 2009, the NEG Board believes that the best course action for their group and all shareholders is to proceed with an equity fundraising to secure funds before the end of the year.

A NEG statement said: "The Board, together with its independent advisers, has carefully explored a range of strategic options during the course of 2009. In relation to the recent Stagecoach proposal the Board concluded that there was significant uncertainty that a combination with Stagecoach could be successfully executed in 2009. Non-compliance with 31 December 2009 banking covenants would require the Group to seek further concessions from its banking partners, incurring additional cost and creating significant uncertainty for National Express shareholders. The Board believes it is in shareholders' best interests that an equity fundraising be undertaken as soon as possible to secure a sustainable capital structure for the Group." 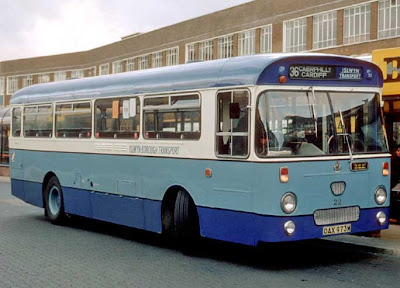 Nostalgia - though a frequent sight on the streets of Blackwood until relatively recently - in the form of OAX 973M, a Leyland Leopard/Willowbrook, new in 1973.
Undoubtedly, the precarious financial predicament in which NEG finds itself is so dire that investigating a possible merger with Stagecoach would take too long and would force the group to miss the deadline of its banking covenants and the resultant financial penalty imposed would be very difficult to bare - half-a-million pounds, on top of the £250k penalty already owed. (GL)