Many weren't surprised when the Cosmen/CVC consortium potential purchase of National Express Group (NEG) failed, that Stagecoach would make a fresh bid for the beleaguered transport group. In a slightly different manner of approach, Stagecoach have now chosen (perhaps conceded) to approach NEG with a merger proposal rather than that of an outright purchase. 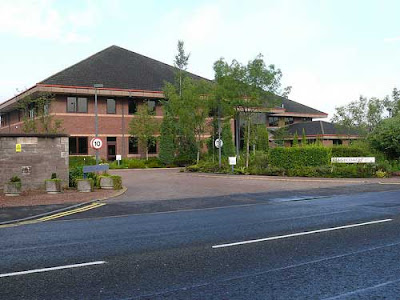 Call it a merger or a take-over, this will become NEG's new HQ: Dunkeld Road, Perth, home to Stagecoach. M'colleague used to live virtually opposite!
The deal is currently being described by Stagecoach as a 'highly preliminary' merger proposal to the tune of £1.7 billion, which would see NEG shareholders retain no more than 40% of the new supergroup, should the go-ahead be given. The Cosmen/CVC consortium was in discussions with NEG to purchase a majority shareholding at 500p per share, valuing the company at £765 million, markedly less than that which Perth-based Stagecoach is offering, but the latter doesn't already have a vested interest in the ownership of NEG, unlike 50% of the former. 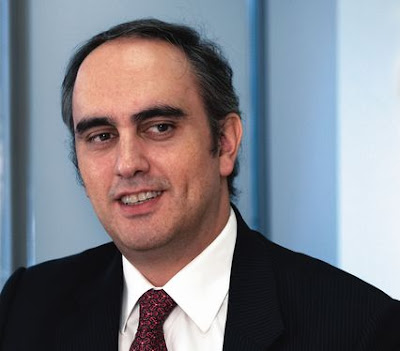 Jorge Cosman, head of the Cosmen family, chairman of NEG's Spanish Alsa coach company (which he used to own), deputy chairman of NEG and an 18.5% shareholder in the group.
Putting both figures in context can only truly be understood when the backdrop of £850 million - NEG's debt mountain - is applied in the same sentence. Effectively, 45% of the money Stagecoach has tabled would be NEG's debt.

So, in an about-turn, Stagecoach's chief executive Brian Souter, is now where the Cosmen/CVC consortium was and, if successful, would look to offload what his company do not want/will not be allowed to keep: National Express' coach business being the main item. The Cosmen family have a wealth of experience running scheduled coach services in their native Spain, and we understand they've been getting increasingly annoyed at the way in which NEG has been running their Spanish, former family-owned, business. Selling the Cosmens' Alsa coach company back to them, along with NEG's NX coach business, Jorge Cosmen and his family will be firmly back in the driving seat, able to focus exclusively on the type of business they've been involved with for nine generations. We've read online that Jorge Cosman, deputy chairman of NEG - holding an 18.5% share in the company - is in favour of Stagecoach's latest approach.

He'd be silly not to be. Stagecoach now deal with the risk and the Cosmen family take the smaller, familiar sector that's in reasonably good shape.

This leaves NEG's American yellow school bus business, reputedly the main reason why the Cosmen/CVC consortium walked away from their takeover bid. I'd imaging First, whose 60,000-vehicle American school bus empire is the largest of its kind in the world, would be only too pleased to add NEG's 6,000-vehicle operation to its portfolio.

There is also chance that the Cosmen family won't want the NX coach business. An alternative contender could be Scottish Citylink majority shareholder, ComfortDelGro, based in Singapore. An acquisition here would see both the National Express coach and Scottish Citylink operations merged under the same umbrella once more (NEG having to choose between its Scottish Citylink coach network or the ScotRail franchise in 1997 - opting for the more lucrative rail franchise, which it subsequently lost to First in 2004). 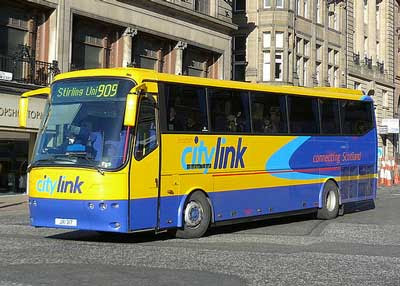 Scottish Citylink's operation mirrors that of National Express coaches: franchised operators running the network of services. Majority owner of the company, Singapore-based ComfortDelGro, do not operate any vehicles. Seen here is a Bruce's of Salsburgh Bova en route to Stirling.
Merger or purchase, it is likely that NEG's HQ will move a few miles north to Dunkeld Road in Perth and that operations such as Travel Coventry and National Express East Anglia will be re-named to include the name Stagecoach in their titles. NEG shareholders could protest en mass, but they'll only have a 40% say in the business. 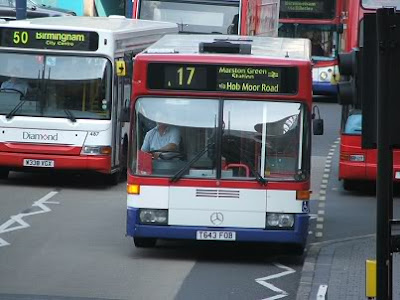 Feather in the cap: the West Midlands business is the UK's largest stand-alone fleet of buses and is something all of the 'big five' would love to get their hands on. Competition has grown from smaller operators, including Rotala-owned Diamond Bus seen on the left.
I suppose whether you love them or loathe them, Stagecoach are at least willing to try and restore some form of normality to the modes of transport under NEG's control, while making a substantial financial profit in the long-term themselves. Interestingly, should the merger go ahead, Stagecoach would be the largest light-rail operator, with Manchester's Metrolink, Sheffield's Supertram and Birmingham's Midland Metro under its control. They'd also be the operator of the UK's largest stand-alone bus fleet - National Express West Midlands, which isn't thought to be in the best of shape, but a prize worth fighting for nonetheless. Another interesting fact is that I have 11 different ties from the West Midlands bus fleet, but that, as they say, is another story... (GL)