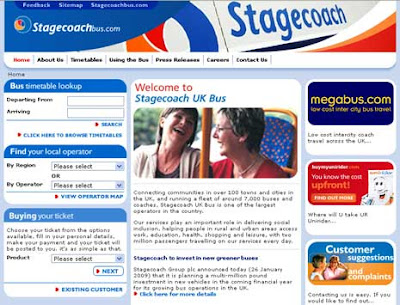 ... and in with the new for Stagecoach. The transport operator has enlisted the help web design supremo Emperor Design in revamping its UK Bus website. 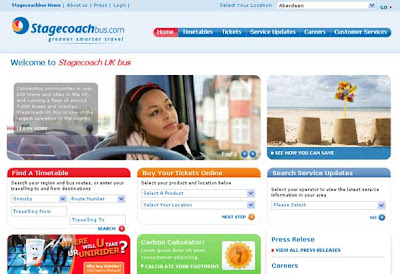 The new design is a little easier on the eye than the old one. Gone is the still shot of a vinyl from the side of a Volvo Olympian that was the main header(!!) and we say hello to a new strapline for the division: greener, smarter travel (we added the comma so that it becomes grammatically correct!)

In a recent survey of corporate operator websites, undertaken by Iventis, all those listed on the FTSE250 (the 250 biggest companies after the top 100, which of course feature on the FTSE100) Arriva's came out in second place, with Stagecoach coming in fifth and National Express 7th. First forms part of the FTSE100, coming 75th in that league. Back in the FTSE250, Go-Ahead came in at a disappointing 57th place.

Or was it? Coming in 5th position of all FTSE250 companies, while not beating Arriva, is still an impressive achievement, though this, coupled with the approaches firms like Stagecoach receive all the time from web designers, eager to get their hands on their corporatism, has got the ball rolling.

Not all features on the new-look trial website work at the moment, though the timetable look-up facility appears to be fully functioning, certainly for examples we looked for in the LEYTR area.