During my recent trip to Glasgow, I spent my short time there fulfilling one of the last-remaining trips using a transport system I've hitherto sampled: the Glasgow Subway, aka The Clockwork Orange.

This is the modern-day signage that is SPT's equivalent to London Underground's roundel
The Subway is one of the smallest self-contained rail systems in the UK, coming in at 10.4km (6.5mi) in length, with 15 stations along its circular route. Using twin tunnels, trains operate clockwise on the outer section and anti-clockwise on the inner section. Trains are thus marketed as 'outer' and 'inner' thus enabling passengers to catch the right train for their journey.

Situated in the centre-west of the city, the entire network operates wholly underground. Ironically, the maintenance facility at Broomloan Road is at ground level. The whole system struck me as a mini Tube network, with tunnels measuring only 3.4 meters wide, accommodating the unique track gauge of 1219mm (or 4 feet) between rails. There are some pretty steep gradients along the route, too, with inclines of 6% seen in places (generally as the line climbs after having descended the River Clyde) and the most quirky aspect I spotted was the hump effect each station has: the line rises at one end of each station, to a crescendo in the middle, before falling away as the other end of the station/start of the approaching tunnel portal.

My claim to fame is that I've travelled along the metals of all light-rail systems in the UK, operating normal passenger services, though have never got near the Glasgow Subway until today. It took me 20 minutes to make a round trip on the 'inner' route (anti-clockwise), though time constraints meant I was unable to undertake an 'outer' circumnavigation. The cost of a one-journey ride is a flat rate of £1.20 (60p child). Scottish National Concessions travel at a flat fare of 40p and a day ticket is available priced at £3.50. I therefore paid only £1.20 to do a complete circuit and identified it being possible to undertake a circuit in the opposite direction without having to purchase another ticket. Only the insane and editors of one of the UK's longest-running transport publications would want to do this though, so I can't see Strathclyde Partnership for Transport (SPT - who both own and operate the system) losing much money here!

Similar to the French Metro, a ticket is needed to gain access to the network, though thereafter the user doesn't have to worry too much about where they place it for safe keeping since on exiting stations, the turnstiles are free-turning. SPT advise passengers, however, to retain tickets for inspection. The most impressive aspect of the system though, for me, was its cleanliness. The Glasgow Subway is absolutely spotless. Not one spec of litter or graffiti did I spot in the time I was down there. Also pleasing to see was that loadings weren't on a par with say the Piccadilly Line at rush hour, yet the Glasgow Subway carries in excess of 14 million people every year and undoubtedly has its own congested rush hour, though happily I was to avoid this.

Impressively, the Glasgow Subway is the third-oldest subway system in the world, after the London Underground and the Budapest Metro. Opening on 14 December 1896 it started out life as a clutch-and-cable railway, though soon became electrified. Its initial title was the Glasgow District Railway, though changed to the Glasgow Underground in 1936, with the SPT officially adopting the 'subway' name as late as 2003. 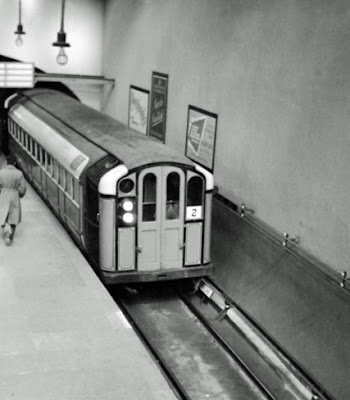 'Back in the day', an original Oldbury Railway Carriage.
In the early years, there was no cable installed to permit trains to move between lines, so they were hoisted across by train; a crane was also used to lift them from their subterranean tracks to the first maintenance depot near Govan station. The main advantage of lifting trains between tracks using a crane was that neither line required points and could be operated with minimal oversight. Success, however, didn't come immediately, since an accident on the system's opening day saw no further service until 19 January the following year.

Twenty one-car trains were initially operated. Built by the Oldbury Railway Carriage and Car Company based in Worcestershire, these work-horses generally remained in service until 1977 - ain impressive 81 years' service in many cases. People complain that the BR Class 141 'Pacer' is long overdue a replacement: imagine being told they were to remain in service for another 40 years! Of the initial order for 20, only ten operated during the first year, with the balance arriving in 1897 and in 1898 a further ten additional carriages were built by the same manufacturer and used to form two-car trains. 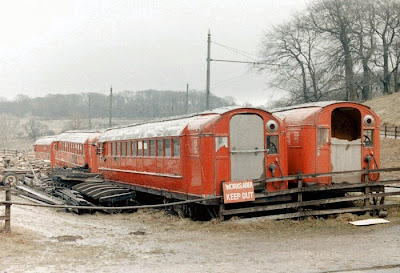 Six of the original cars were 'dumped' here at Beamish, seen two years after their withdrawal from service. At the time the Subway was closed, undergoing massive refurbishment.
Interestingly, all original stations were built as island examples, with trains calling at the same block of concrete. This necessitated trains to have doors on one side only. Today this is different, with numerous stations conforming to the style seen throughout the heavy-rail network in the UK, i.e. a platform per direction.

With World War I long gone, the Glasgow District Railway sold out to Glasgow Corporation in 1923. The original plum and cream livery was retained and it wasn't until 1936 that the next major alterations took place: electrification. Gone was the original livery by 1950, replaced with a more bland red and white colour scheme. A man called Beeching had his say about Britain's rail network during the 1960s, though a weakness of the Subway became a strength at this time: it had no direct link to the overground rail network; consequently when Beeching's axe fell on Buchanan Street and St Enoch stations, their equivalent subterranean sisters remained unscathed. By the end of the '60s, the Greater Glasgow Passenger Transport Executive took over responsibility of the Subway from Glasgow Corporation.

Wholesale modernisation came at the end of the 1970s, with the original trains being replaced with 33 brand-new Metro Cammell carriages, built in Birmingham and equipped with GEC electric motors. Regrettably though, the replacement of rolling stock was the least of the Subway's worries: ridership had waned impressively, partly due to the closure of Glasgow's dockyards and also the demolition of large numbers of social housing south of the River Clyde. Although stalwarts, the trains were becoming less reliable and a breakdown caused massive delays since the only way a 'dead' train could be taken out of the way was by crane. Stations were looking dilapidated and an 'earthy' smell was commonplace down there. Then a crack was spotted in the roof of the then named Govan Street Station.......

From 24 March - 2 May 1977 all services were suspended pending 'crack investigation'. Although trains resumed operation, the entire Subway network closed 19 days later following the emergence of yet more cracks at Govan Street. From 21 May 1977 to 16 April 1980 the Subway remained closed, while stations were extensively renovated; a new one was built at Patrick; a moving walkway was installed between Buchanan Street and Queen Street stations; escalators were installed for the first time at some localities; new ticket machines and automated ticket barriers were installed, which saw-off the use for conductors; and a new livery/colour scheme was applied. 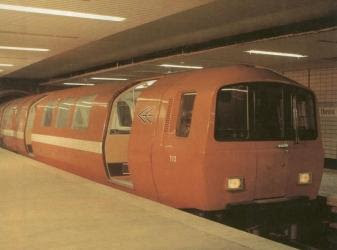 This livery coined the system's nickname 'The Clockwork Orange': a vibrant orange, er, SPTE red, seen here in 1980
The Subway was officially opened by The Queen on 1 November 1979, not far off the system's 83rd birthday. Her Majesty declared the Glasgow Subway open, wishing well the new trains in their bright orange livery (with a white stripe) and inspecting the new-look stations that were predominantly coloured brown, yellow and off-white. It wasn't long before the eye-straining livery was toned down to a more acceptable, darker shade of orange, which didn't show up dirt as much, and during the 1990s this was replaced by the existing livery seen today (SPT's carmine-red and cream). Interestingly, both shades of orange livery adopted were officially referred to as 'Strathclyde PTE red' to alleviate any sectarian sensitivities in the city. 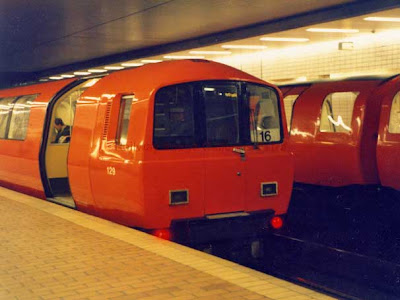 The toned-down(!!), slightly redder livery applied in the late-80s.
As for 'The Clockwork Orange' name, its origins are split between the infamous Stanley Kubrik 1971 movie adaptation of a book with the same name, and a one-liner made by the then chairman of British Rail, Sir Peter Parker, who referred to the system as "the original Clockwork Orange". Certainly the date the movie aired and the one-liner muttered tie-in well. Who knows? 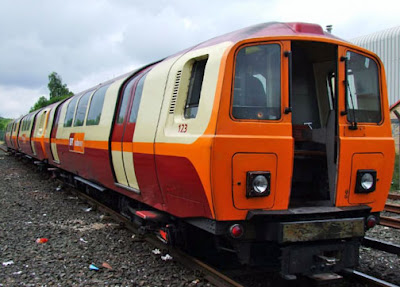 A very rare shot indeed - a Metro Cammell carriage seen in daylight at the Broomloan Road depot.
As to the future, the Glasgow Subway could be in line for an extension. In 2007 SPT shared with the city the plans its consultants had recommended: major refurbishment of the existing rolling stock and stations, costing £270 million; and the expansion of the existing network at a cost of £2.3 billion, including a new East End Circle, with seven new stations. The latter aim is to make better use of transport links in the city that have a poor rail service. 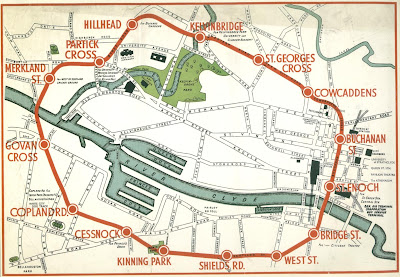 The original map. Click for an enlargement. The network itself is unusual in that it hasn't been altered at all, though a couple of stations have gone/been built and re-named.
I was very impressed with my short ride aboard Carriage 002 on the Glasgow Subway. Trains appeared to operate to a six-minute frequency and I let the first three go by in order to capture some photos at the station where I boarded. I suspect that for the drivers monotony could set in a little too quickly; with a round trip taking a mere 20 minutes on the 'inner', how many rotations would a Subway driver be expected to undertake per shift? The lack of daylight must also be a downer, too. The next time I find myself in Glasgow, I'll be making a bee-line for the Subway, if only to complete the 'outer' line and completely tick the box! (GL)