It took some guts admittedly, but in the end London Mayor Boris Johnson had to come clean and announce a hike in bus fares of 12.7% during 2010 and of 3.9% for Tube fares. Quick to limit any damage, Johnson said that the fares were virtually identical to those implemented over 2005-6. Apparently this was meant to make Londoners feel better.

Do you consider London's transport tickets good value for money? It's a tough question to ask because the area broadly contained within the M25 that is TfL's territory is so large and home to so many people that everyone's requirements are different. Add to this the requirements of tourists - who don't all want to visit Trafalgar Square etc, and opinion is divided.

TfL's area shaded in mauve. It's a fairly large area but residents therein generally do not travel from extemity to extremity each and every day.
Personally, I feel that for the area covered, TfL's tickets aren't that cheap. Such is the congestion in Greater London that TfL can pitch its unlimited-travel tickets at a slightly higher than comfortable price, since the only other competing mode is the private car or cab - both of which do not fair well in the bumper-to-bumper metropolis. TfL's tickets therefore offer much better value in transporting people around the area in terms of journey time. Canary Wharf to Hillingdon by car at 4pm could easily take twice that of the Tube, including changes en route. 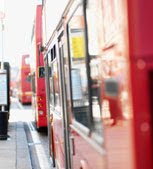 When finalising its price rises, TfL will have undertaken all sorts of calculations, the most important being the deficit in its budget for the coming year against the likelihood of losing custom (and revenue!) through raising fares too high. There's always a 'resistance factor' when fares increase, though this usually steadies fairly soon. I'd love to know the level at which TfL felt it could justifiably raise its fares before significant numbers of people chose to surrender their Travelcard in favour of their car or National Rail service. Could it be the values the Mayor announced on Wednesday or larger increase? I suspect fares could have risen a lot more before people turned away.

On the plus side, TfL's Freedom Pass scheme will continue to offer 24/7 travel for those entitled to concessionary travel and residing in Greater London. (Those in possession of the English National Concession pass will continue to be able to use it in London 0930-2300 weekdays and at all times weekends/holidays). TfL's Freedom Pass scheme also includes under-16s and those 16+ and in full-time education. Consequently, Johnson claims 40% of residents in London will see no increase.
Of course this means, broadly speaking, that the remaining 60% who do pay will cop the rise in fares for those who do not.

Said the Mayor: "I know that Londoners value hugely the expansion of, and improvements to, the buses and Tube and the free or concessionary fares available for many passengers. I share that view. Yet it is now clear to everyone that the era of ever-rising funding from the taxpayer is now firmly at an end. I will need to take this into account when it comes to setting fares in future years. But I am determined to ensure that fares in London will continue to deliver excellent value for money, particularly when compared to the fares charged in other UK cities."

Main items of note are:

£16.60 for a week's travel on buses initially seems pretty steep, but when places such as Sheffield charge £16 for use on one operator's services only, reasonable value is attained in London. I say 'reasonable' because most people simply want to commute to work five times a week and aren't like me (and other readers of this blog), willing to have a ride somewhere else just bacause I/we can. The distance many people commute by bus in London will be no greater than someone living on the outskirts of Sheffield who needs to travel into the city centre. (GL)