And then there were 6?

Although the Cosmen consortium has yet to purchase National Express Group, (NEG) it's widely seen as a done deal. Forming part of said deal is Stagecoach approaching the new owners to take on its rail franchises, namely the Thameside (c2c) and Greater Anglia (NXEA) operations. 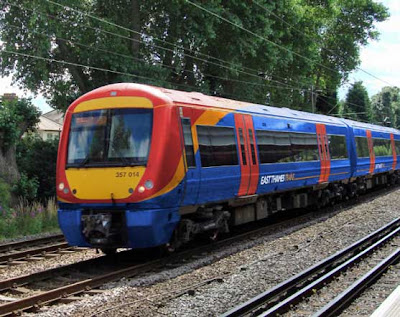 Look carefully at this mock-up livery: an artist's impression of what a Class 357 operating for c2c might look like under Stagecoach tenure: East Thames Trains.
Those more acclimatised to the bus industry will know all too well how near the country is to seeing the number of council-owned bus operators drop into single figures; what isn't so liberally bandied about is that for many years the rail industry has been in the hands of just 7 operators, albeit none council-owned.

Cast your mind back to 1995, in a year when, on 19 December, the first bit of British Rail was sold to a private enterprise: newly-formed South West Trains took over the operation of the pre-defined South West franchise, with its parent company, Stagecoach, at the helm. Twenty-four further sell-offs took place until the last in 1997. British Rail's passenger operations were split into 25 different franchises and although this number has stayed relatively constant throughout privatisation, the number of companies controlling the TOCs has steadily reduced. 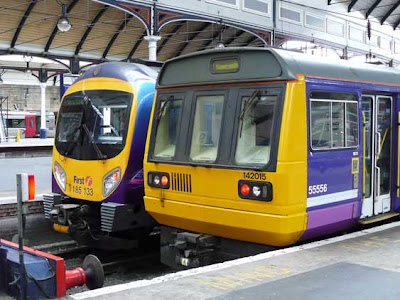 Northern is 50% owned by the state-run Netherlands railway company, NedRailways, and one of its oldest trains is seen on the right: a Class 142 'Pacer' - based on the Leyland National bus.
I think it right to merge Stagecoach and Virgin, since the former has a 49% stake in the latter's West Coast franchise. Assuming Stagecoach takes control of the remaining NEG franchises, only the following companies will remain:
Open-access operators (First Hull Trains, Grand Central, Wrexham, Shroprshire & Marylebone and Heathrow Express) have been omitted as they didn't form part of British Railway at privatisation. Also omitted is the government-controlled East Coast franchise, though in reality, when tenders are invited, it will surely go to one of the six companies listed above.

So, effectively, in 12 years of privatisation, the number of companies controlling the 25 (ish) TOCs (the number has recently reduced with the Gatwick Express franchise forming part of the new Southern franchise) has halved, from 12 to 6.

Twelve years ago where there 26? (GWB) 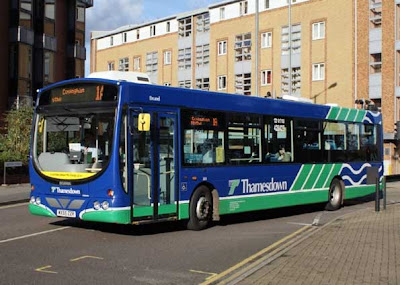