Preston purchase may "harm the interests of passengers"

Having agreed the purchase of employee-owned Preston Bus at the end of January, Stagecoach probably wasn't too surprised the acquisition was to be scrutinised by the Office of Fair Trading (OFT).

This duly commenced and an announcement was made in May that the OFT planned to pass the purchase onto the Competition Commission (CC), following its decision that the purchase may well not be in the public's interest.

Yesterday, the CC announced that it is almost ready to make a ruling known following its months of deliberation. In a preliminary statement, the CC said: "Our provisional view is that the loss of competition caused by this merger could have an adverse impact on passengers in Preston by leading to a worsening in fares and other factors such as service levels. Without the merger, we believe the potential or actual competition each company would have faced from the other would have ensured that they maintained or improved their services in order to attract passengers. We are now considering a range of possible remedies to deal with our concerns."

The CC has also revealed that Stagecoach's competing services from June 2007 to September 2008 were running at a heavy loss, and that this contributed to Preston Bus' weakening position. 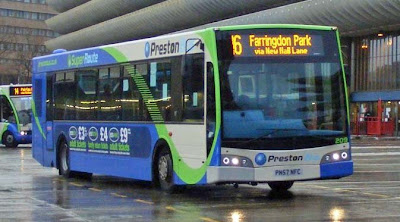 Many people felt at the time that Stagecoach was trying to force Preston Bus out of business as legitimately as it possibly could, having its past antics from the '90s at the forefront of its mind, preventing the company from taking any other direct measure. As you'd expect, support for the employee-owned local operator was strong throughout the conflict, with Preston Bus' managing director remaining defiant right up to the very end.

Many of Preston Bus' shareholders were drivers who were approaching retirement and who therefore stood to gain the most from cashing them in. The deepening recession was also seen as another indicator as to why the majority of shareholders opted to sell to Stagecoach. Some drivers received up to £30,000 as a result of the sale.

The CC's final decision? It will take one of three forms:

A final decision is to be made in a report, published by 12 November. Opinions are being sought, with the final date for these to be received by the CC as 24 September. See the CC's interim statement for way to get in touch. (GL)