Last week we brought you details of the vision Network Rail (NR) had for the UK's second high-speed line (HS2). They suggested the route should operate from "London Central" to Scotland, with spurs for Edinburgh and Glasgow. The main body of the route would roughly follow the West Coast Main Line route, with branches for Heathrow, Birmingham and Liverpool/Manchester.

The cost of the scheme was put at £34 billion and we were initially of the opinion that, while pre-empting what the government's own High Speed 2 company was set-up to study and report on by the end of the year, at least now a figure is being banded about. We were wary that, in keeping with the planned speed restrictions for normal running that Southeastern will enforce when it operates its full timetable on HS1 from December, HS2 should not fall into the same trap.

RAIL columnist, transport writer and journalist Christian Wolmar feels that there are many other pitfalls bestowed on NR's vision; indeed, quite a few industry insiders are now speaking of how ludicrous NR's vision is.

In describing perhaps the real reason for NR's vision, Wolmar likens it to "NR parking its tanks on the government's lawn", with its timing being less than helpful. What will the public think when the government releases full details of the official High Speed 2 company's report at the start of next yet? Confusion.

However, the section of Wolmar's thought-provoking article that made me laugh out loud concerns the cost:benefit ratio for such a scheme. The DfT will not consider any scheme unless its cost:benefit ration is at least 1.5, preferably 2+. NR's vision was to ignore HS2 if it were only to be built as far north as Manchester (and with a Birmingham spur) because the cost:benefit ratio here was less than 1. Fair enough. Only, why is it less than 1? Apart from the notional and tenuous methodology utilised by NR to calculate the benefits, the line - being built from scratch, remember - would only carry 4 trains per hour to Manchester and the same again to Birmingham, yet the line's capacity would be more than double this. Therefore, the line would be greatly underused. 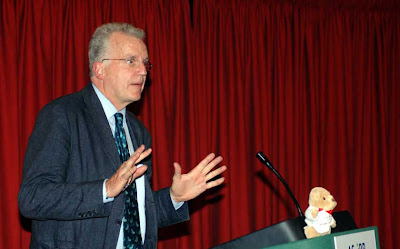 Christian Wolmar regularly makes speeches and is regarded as the "most eminent transport journalist of our time".
As Wolmar so eloquently put it: "the line currently being examined by HS2 [company] is [therefore] not worth building!" NR thusly state that only by extending trains to Scotland can the capacity of the new line be utilised more. So basically, if High Speed 2 company report a comparatively straightforward London-Birmingham-Manchester line, using the figures calculated by the government's arms-length company (NR), the cost:benefit ratio would make it a non-starter.

With HS2 being built in stages - we suggested it would be at least 2040 before it would be completely operational, you can bet your bottom dollar that the "north of Manchester" section would be built last. Would the political will still exist in, say 2025 when the construction work would commence for this section? Would there be another recession by then?

Towards the end of Wolmar's article he states pretty clearly that NR only chose this vision as it is the most costly to built because it requires the most track to lay, and since NR's old mission statement was 'engineering excellence', if you listen carefully you can probably hear their cash register chiming.

So NR's vision may not be as it seems. While it is very welcome to progress the debate on HS2, we fear it may serve only to confuse matters more - especially when the official report is released at the start of next year (it will be handed to the DfT by the end of this year for consideration). (GL)