Prime Minister Gordon Brown gave the clearest indication yet that he is personally in favour of the proposed second high-speed line (HS2), likely to cost many billions of pounds, and that his party would give the green light for its production, should Labour be given another term in office.

If you were a betting man, the chances of the latter aren't as likely as HS2 being built, since the Tories seem equally keen on the idea.

In a pamphlet produced by Labour ahead of its party conference, Mr Brown is quoted as saying: "I am excited by the role that high speed rail could play in a low-carbon future. High-speed rail would provide a fast, low-carbon network linking the nations and regions of the UK. It is telling that those countries that have built high-speed rail are now building more of it. The figures are compelling: there is currently 5,598km of high speed lines in Europe, 3,474km under construction and a further 8,500km planned.... As a country we need to now move further, faster. We must show how we are going to be part of the high-speed rail revolution sweeping across the world." 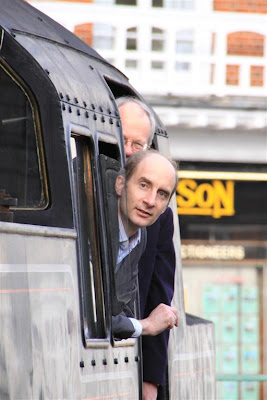 HS2 is a make-or-break deal for Transport Secretary Lord Andrew Adonis, who's made no secret of his desire for a high-speed line. In his first interview as Transport Minister, he told RAIL that there would definitely be proposals for electrification and that it was likely a study group would be formed to look at the case for HS2. Everything so far has happened. He also told Nigel Harris that he wouldn't work under another administration - I can't think there's a rail worker or enthusiast who isn't dismayed to hear that! The Tories would appear to be rather upset at an Adonis-less prospect, too, should their party be elected next spring; so much so, we understand they're making representations to Adonis to move across.

Keeping with the HS2 theme, the plan laid out by Network Rail a fortnight ago has now been criticised by pretty much everyone in-the-know. We understand that the High-Speed 2 Company, commissioned by the DfT - and expected to report its findings by the end of the year - has its own route plan in mind - a diamond shape. London-Birmingham then a line to Manchester, across to Leeds, south to Sheffield and via Derby back to Birmingham. Due to building constraints, many of the stations will take the form of parkways, which is a shame. Leeds-Manchester in 30 mins but another 30 mins to get to the city centre.

Of course, the final details will be published in January, so we'll have to wait until then. It's the first time in my life I've witnessed such enthusiasm in the rail industry. Sure, it still has its problems - franchises are too short to warrant meaningful investment and its fare structure leaves a lot to be desired, but importantly the industry is not being allowed to stagnate while more motorways are being built! (GL)