We've mused on the possibility of Stagecoach acquiring the main businesses of National Express Group (NEG) on a few occasions during the past couple of weeks, inferring that should the offer by the Cosmen family, heading a consortium comprising CVC Capital Partners, for NEG be accepted, Stagecoach would then approach the consortium for a pick of NEG's businesses to operate.

Top of the list as we see it is NEG's bus businesses, primarily because they're a good fit with its own. With the Competition Commission's (CC) seemingly assured scrutiny of any Stagecoach bus purchase nowadays, the geographical localities of NEG's buses would see very little cause for concern - even for the CC. The greatest overlap would perhaps be in the Dundee area, with NEG's Travel Dundee subsidiary operating alongside Stagecoach's Strathtay business. Additionally, a small amount of overlap south of Birmingham would also occur, but neither hotspot would be on a par with the continuing Preston debacle. 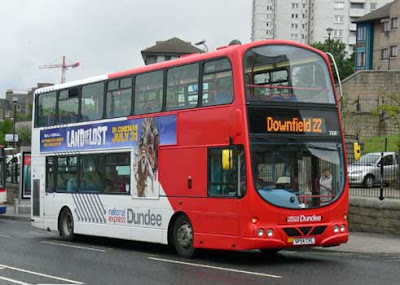 With NEG's re-branding exercise at the end of 2007, the new name for Travel Dundee is technically National Express Dundee; locals continue to refer to the former. Could this company soon become Stagecoach in Dundee?
However, Monday saw Stagecoach announce that it would be willing to pay what many believe is an over-the-odds sum for NEG's rail franchises: c2c and National Express East Anglia (NXEA). £100 million is the figure they are understood to have told the Department for Transport (DfT). With NEG's other rail franchise - National Express East Coast (NXEC) - planning to default (we understand as early as 20 September!), the DfT had been looking to see if this default meant it could legally relieve NEG of its other rail businesses. Our man on the inside at NXEC has told us that the DfT have all but dropped plans for a legal case of cross-deferral, thus effectively ending the chances of an additional two companies being taken into public ownership, despite calls from the unions for this to happen. 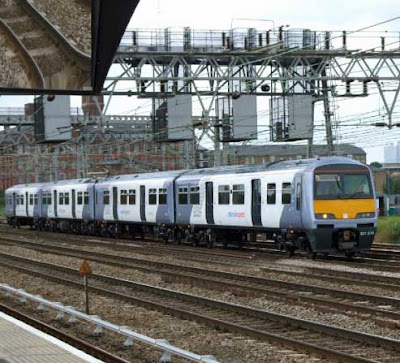 Seen passing Statford is this Class 321 operated by NXEA. Could the name on the side become Stagecoach East Angia?
In making its intent for NEG's rail franchises known, Stagecoach hasn't contacted the DfT directly to do-the-dirty on NEG, instead the £100 million it has offered will be deducted from the price it is likely to pay to the Cosmen/CVC consortium, should they wish to allow the rail businesses to be relieved of them.

Stagecoach has not made its intention known regarding NEG's buses as yet. Perhaps this would cause too much controversy long before a potential deal has been made? Perhaps the Cosmen consortium quite like the idea of retaining some of NEG's bus companies? Travel West Midlands is, after all, the largest self-contained bus fleet in the country, and with a fleet of that size comes the potential for massive profits.. 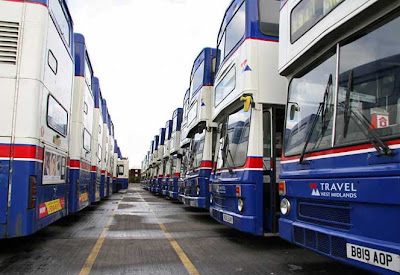 Travel West Midlands (or more recently National Express West Midlands) is the largest bus fleet in the UK and continues to operate ageing MCW Metrobuses. Could this fleet soon be called Stagecoach in the West Midlands?
With c2c and NXEA only mustering a combined annual profit of £30 million, it seems to us that paying over three-times this amount for both franchises is a little on the high side. The c2c franchise expires during May 2011, too. (GL)