"Am I dreaming?" I thought to myself during an ad break on tv last night. I stopped drying the pots and took more notice! No, I wasn't dreaming! National Express have actually paid for a second tv advert. They produced a fair few over the past couple of years on behalf of their arms-length rail franchises, though only ever had one make it to tv for their coach division. 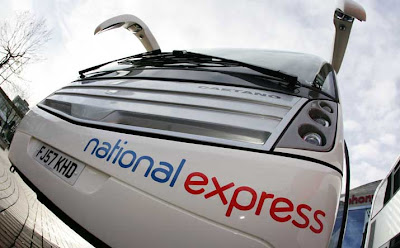 This is the second in the latter's vein and it showed a family approaching a line of NX coaches parked up, each displaying a different destination. As the family grew ever-closer to the coaches, they all diverged, each boarding a different vehicle. The voice-over went along the lines of "There are so many great destinations to choose from that you wont know which one is best for the family."

The sooner October comes, and NX has its name removed from the East Coast franchise, the sooner the group can put its disastrous foray into this type of rail franchise behind it and concentrate on its two smaller operations - c2c, incidentally, is, for the first time since being operated by NX in September 2000, after it purchased Prism Rail, now being branded as National Express c2c. I'm sure NX are only all too aware that they ought to go back to basics for the next few years, subject to their all-out purchase, and put all their energies into what they do well.

Soon to go - the c2c logo that was developed in 2002, while continually owned by NX, is finally being removed in favour of corporatism.
With a cross-country Megabus expansion timetabled to commence at the start of October and First's Greyhound brand in direct competition along two London-South Coast corridors that Megabus doesn't seem too bothered about, there is a lot for NX to ponder; a lot for it to get its teeth into. I'm sure the end of the year can't come soon enough for the stricken group, when it can wipe the slate clean of its very much arms-length NXEC - and also wipe off just over £102 million in the process.

When NX do it well, they knock the spots off their coach competitors. They're the 179th world superbrand; they rely on tried and tested methods and techniques; are more than happy to stick to tradition, which in turn ensures loyalty from those of a certain age - and they don't deputise their scheduled coaches with Enviro400-bodied Scania 'deckers!

Yes, retrenchment is needed to gather their thoughts, take stock and to re-establish themselves. Choosing to get right out there in the coach business again, with what must be an incredibly expensive tv advert, is an excellent move. (CW)