On Wednesday, Network Rail (NR) announced its plan for the UK's second high-speed railway line (HS2). Following on from the growth of HS1 that links London with Paris and Brussels (and also Dover and Folkstone from next month), a line wholly within the confines of England and Scotland has been on the cards for some time.

NR's plan is more a long-term vision. It will cost £34 billion to build and will permit trains to travel at 200mph (faster than those running along HS1) and will see journey times between London and Scotland fall to a very impressive 2:09. 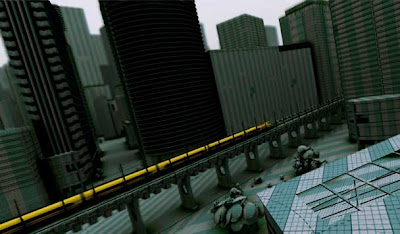 This is one of Network Rail's concept images. Similar to concept cars, there's a good chance it may never see the light of day. Could building a high-speed railway line suspended on stilts be the best way to enter Birmingham, Manchester, London, Glasgow and Edinburgh?
The route taken is that which NR sees as the 'best option'. The route is a new line between central London and Manchester, with a spur to/from Birmingham. North of Manchester the new line continues to Preston, with a spur to/from Warrington and Liverpool and then bifurcate to Glasgow and Edinburgh. The line is estimated, by NR, to generate value of £55 billion, i.e. considerably more than its construction cost.

Remember: the whole ethos of HS2 is that it will be a completely new railway, standalone from any other rail line that exists. The entire London-Manchester-Edinburgh/Glasgow line would be built from scratch.

"It's absolute bloody madness!" said a fairly well-known rail insider. We've delayed uploading news of NR's plan to get responses from out well-placed sources. Candidly this eminent individual continued: "If you thought - as you do - that Crossrail was a logistical nightmare, linking the eight new central London subterranean stations with the outside world, then imagine the complete and utter hell building an Anglo-Scottish high-speed line from scratch! Where would it go? How many court appeals over land purchases would there be? How many activists tying themselves to trees on the edge of the Peak District is there likely to be?"

"It's akin to building both the M6 and M8 from scratch without gradients and bends."

NR's chief executive Iain Coucher was naturally more upbeat: "High-speed rail can transform Britain. It can promote economic growth, regeneration and social inclusion. It is a low carbon option – cutting domestic flights and taking cars and lorries off the road. It will release capacity on the existing rail network and revolutionise passenger journeys. Demand for rail travel is growing and our main lines from the north to London are nearly full. By 2020 we will be turning away passengers – that’s not what we want. We need to start the planning now to meet future demand and the solution is a new high-speed railway to the Midlands, the North West and Scotland. The line has a sound business case that will pay for itself."

But passengers *will* be turned away though because the likelihood of the first sod being cut by 2020 is very unlikely. Are we being too hasty though? Nothing like this has ever been valued before. Lord Adonis set up the HS2 Company in the spring to report to him its favoured routeing and costings by the end of the year. NR have pre-empted this with their report. It is after all only their opinion. We should actually be grateful that a company has finally ut a price on the cost of HS2 to build at 1.8 times less than the projected revenue potential and benefits it will generate.

Journey times are as follows (projected/current):

Let's roll the clocks forwards to 2040, the year HS2 could conceivably be up and running. Let's assume Network Rail still exists and that the plan they've outlined was adopted. What's to stop train operators doing precisely what Southeastern has done and to put punctuality (or more specifically, the fines associated with poor punctuality) ahead of the headline-grabbing figures for the line? Running trains at 140mph rather than 200mph from London to Glasgow really will increase the journey time. The mindset needs to change.

If we're going to build a new railway at a cost of around £34 billion, we need to ensure the way trains operate along its length are done so in keeping with the self-same ethos. (GL)