What has been described as a 'virtual operator' by its chairman now looks set to become a more tangible operation following the acquisition of a small disused factory site in north London. Purchased at a cost of £2.27 million, easyBus chairman Stelios Haji-Ioannou announced that his company was now "big enough and old enough to do its own work.... We have applied for our own licence and need our own premises for that."

The first easyBus service launched on 13 September 2004, linking Baker Street in central London with Luton Airport using a fleet of minibuses and operated by Arriva The Shires. This was disbanded when cross-ticketing arrangements were secured with Arriva's Greenline Service 757, operating betwixt the same localities. A fleet of Mercedes-Benz Sprinters provided the second new easyBus service between London Victoria and Stansted Airport on 7 June 2007, and on 18 March 2008 the third new route commenced operation linking London Victoria with Gatwick Airport, operated by Arriva subsidiary New Enterprise Coaches of Tonbridge, utilising Optate Sorocos to a twenty-minute frequency. 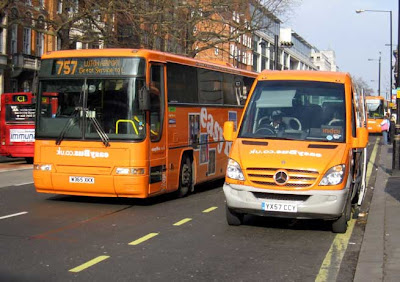 Seen at their central London terminus on Buckingham Palace Road is a Greenline Service 757 wearing an overall livery/advert for easybus arriving from Luton Airport and an Optare Soroco minibus operated by New Enterprise Coaches loads, bound for Gatwick Airport.
Arriva operates all three services on easyBus' behalf. There are many advantages of this to an operator dipping its toe in the water. But profit return is limited. How Arriva secures payment from easyBus isn't fully known, though we've been told it is done on a franchise basis. With the downturn in the economy forcing people still able to holiday away from Britain to do so by low-cost airlines, easyBus' sights are now firmly set on Heathrow.

New Service EB4 could be running by Christmas, under the steam of parent company easyGroup, as opposed to Arriva. While the 'easy' brand covers all manner of items now from pizzas to hotels and men's products, aviation - easyJet - is still by far and away their most identifiable brand. Operating to/from airports is therefore a no-brainer for the company.

As a now very senior bus MD told me back in 1997, when he'd been awarded the 'top job' for a firm in Manchester, "there's no brass to be made from industrial estates and airports." If that were true, then why do coach operators run services from all over the UK to places like Luton and Stansted, not to mention Heathrow? 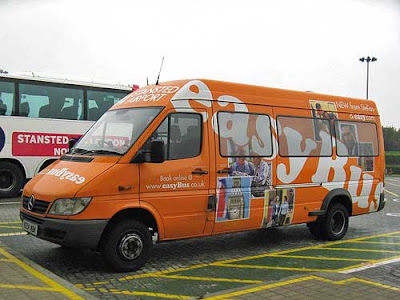 The mainstay of Service EB2 linking London Victoria with Stansted Airport are Mercedes-Benz Sprinters. Seen here is one such example, operated by Arriva The Shires.
National Express (NX) coaches do not offer their dirt-cheap Funfares to airports; they do not extend their winter special offers (£9 anywhere single) to/from airports; Megabus do not operate to any airports; and First's forthcoming Greyhound services choose to deliberately omit Heathrow. No, running buses and coaches to airports is a premium business. Services also have to operate well outside the 7am-7pm window. For Gatwick's first flights at 0600, international check-in needs to be by 0300 at the latest and operators need to timetable their coach arrivals by 0200 to allow sufficient leeway for delays.

How about economies of scale such as timetabling a service to call at two airports on the same journey, such as NX Service 230 (Mansfield-Heathrow-Gatwick)? Very good in principle, but it doesn't work to Luton and Stansted. You also need to be careful not to price your coach fare too high - passengers will ridicule you for charging more to travel from Bristol to Gatwick than from Gatwick to Prague! This is something the aviation lobby believe is in their favour and why high-speed rail won't properly take off (if you'll pardon the pun): some short-haul/internal flights cost from £10 single, inclusive of taxes; can HS2 compete knowing how expensive rail fares can be?

On the face of it though, the easyBus brand puts some of these issues to bed - they operate up to every 15 mins, 24/7 to/from Luton, thanks to the Greenline 757; but their Stansted and Gatwick services aren't 24/7 operation. They overcome the 'coach to airport cost more than the flight to Europe' situation by using a form of yield management, issuing fares from £2 single. But with no peaks and troughs associated with commuter services, they cannot be guaranteed of full vehicles, except perhaps around one or two popular flight departure times each day. Yield management does not offer the type of profit a set-in-stone fare table does with guranteed passenger numbers. Their Merc' Sprinters and Optare Sorocos cannot seat as many as a Veolia-operated Volvo B12B/Plaxton Panther that rules the NX 230. 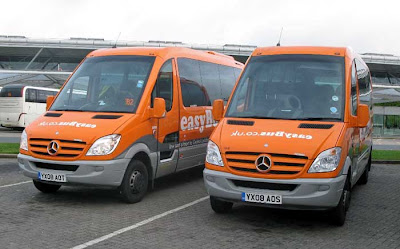 Two brand-new Optare Soroco-bodied Mercedes minibuses pose for a shot. They were purchased new by Arriva's New Enterprise Coaches subsidiary to operate Service EB3 to Gatwick.
I've seen for myself the situation where people have been turned away at easyBus' Colonnades stop in Victoria; it's a frantic time as one half of the party travels and the other half anxiously awaits the next service - hoping there'll be room and that they don't arrive at Stansted too late!

Operating the services themselves though will give easyBus the ability to meet the demand required and to change various aspects if and when necessary. It must be a step in the right direction to this relative newcomer. Their main advantage over NX is that their airport services from central London only operate to that specific airport; NX's services all continue beyond Heathrow to the West Country or beyond Gatwick to Brighton - economies of scale again, yet still NX Funfares are not offed - which can cause problems with punctuality for passengers travelling into central London from these airports. A delay on the M5 in Cornwall can make the 2155 Heathrow-London Victoria run very late indeed!

We wish easyBus every success though. They made a steal on the north London property, purchasing it in a cash deal that was 35% below the asking price. Their brand is striking and fresh (no Best Impressions swirls you'll notice) and they offer a warts-and-all attitude to their public relations.

Ironically, the planned bus expansion has seen a revised livery applied to their fleet that indirectly promotes other airlines: now the message "whoever you fly with" has been added, to ensure travellers know that they don't have to catch the easyBus to catch the easyJet! (GL)