The pitfall of spontaneity

"Do I look like a guy with a plan? The Mob has plans; Gordon has plans.... You had plans and look where that got you!"

This was The Joker's attempt to persuade Gotham's District Attorney, who lay in a hospital bed with half his face burned off, to accept Chaos theory in a scene from last year's blockbuster movie, The Dark Knight.

Later in the scene - just before the entire hospital was raised to the ground using not-so-Chaos-based tactics employed by The Joker, the following line was uttered: "And the thing about Chaos..... It's fair!" 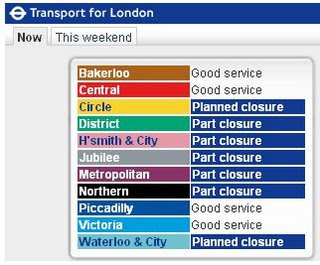 Are these closures planned? TfL believes that saying that they are is likely to stop us all moaning.
Transport for London (TfL) do not base their Underground engineering works on the sentiments of that made by the late Heath Ledger's Oscar-award winning character, oh no. They have chosen to deliberately place the word "planned" at the start of all their announcements for engineering works, as if to make us all sympathetic with their plight and to not feel in any way inconvenienced with the amended travel plans we are likely to have to make.

"Due to planned engineering works this weekend, the District, Circle, Victoria, Hammersmith & City and Metropolitan lines are closed" is effectively what we were told for the past two days. Only the Victoria line saw complete closure, but for the journeys we wanted to make, the others may have all been closed, too.

I fully appreciate the need to upgrade the Tube and that owing to its intensive operation, this needs to be done overnight and for more extensive works, over weekend periods, when there aren't the massive peaks in demand. My 'beef' is the insertion of the word 'planned' as if to win the travelling public over. 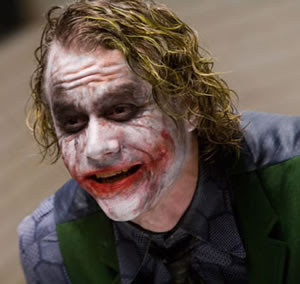 "Let's put a smile on your face" - should TfL take a leaf out of The Joker's book?
Its place in the announcement hopes to persuade us that this is all 'part of the plan' (another quote from The Joker) and that we are unlikely to worry or be unduly aggrieved at the prospect of replacement buses, because it's all part of the plan. TfL must therefore believe that the removal of the word 'planned' is likely to cause Tube passengers great concern as the established order has been upset (yet another Joker quote).

As my comparison rant draws to a close, what can we deduce? Surely that The Joker needs to take over the control of the London Underground. It's the only sensible way to progress. TfL is playing right into his hands. (GWB)