New Transport Secretary Lord Andrew Adonis has told residents in Tyne & Wear that he will look into whether or not the funds allocated to free bus travel in England could also cover the Tyne & Wear Metro. 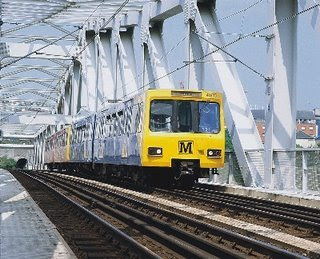 It's quite clearly not a bus, but residents in London can travel on the Croydon Tramlink and residents in Manchester can travel on their Metrolink; even City of Nottingham concessions travel free for the most part on NET, so why can't residents of Tyne & Wear on their completely nationalised light rail network?
Having admitted in the Lords that the amount central government gives to local councils to fund free bus travel is "huge", coming in at about a billion pounds a year, it could be that the Treasury will block any such move.

But do T&W residents get a bad deal as it is? Currently, anyone resident therein can travel for free after 0930 on weekdays on the Metro for £12 a year, through the purchase of a Gold Card. Even residents in Northumberland and Durham have the option of a £25 Gold Card that covers the Metro post-0930.

It is the north-east peer Baroness Lady Quin who has been asking for free travel to extend to the Metro. She was one of the main exponents of the existing free scheme that covers local bus services across the nation.

In a statement she made in the Second Chamber recently, Lady Quin said: "It was designed so that buses and Metro trains would operate in a complementary way to create a proper, unified system. Sadly, bus deregulation undermined this very greatly but, despite that, people in the conurbation still use a mixture of train and bus in their regular travelling. However, concessionary bus passes, unlike in London or Greater Manchester, cannot be used by local residents to travel free on the Metro system. I would like Tyne and Wear residents to benefit in the same way as those in the much larger Greater London and Greater Manchester areas.”

Agreeing to "consider further" what she said, Lord Adonis also commented that the total amount of money spent on bus services is now £2.5 billion, as if to suggest that this figure was already a little too high and that any further request would be turned down by his colleagues at the Treasury.

As for the Metro's Gold Card, around 80,000 are sold each year now. Card sales go back into front-line Nexus (Tyne & Wear ITA) services, including subsidised bus and rail services. Metro is still completely nationalised - one of the few-remaining light rail systems to be so. It may not be for long as we reported last year. That is another story.... (GL)