First South Yorkshire gave notice a fortnight ago that it intends to pull out of Sheffield's groundbreaking Qulaity Bus Partnership, in conjunction with South Yorkshire PTE/ITA, after talks between the two parties broke down.

SYITA claim that First wanted to reduce the number of services in one of more of the QBP areas, and would have been forced to pay compensation to them, under the terms of the QBP. First refused to do this and so have pulled out of the Partnership altogether. 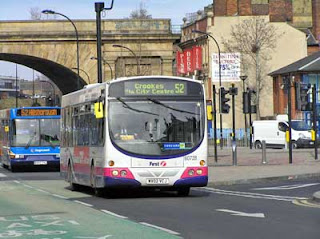 Covering the Wicker, Hillsborough and Glossop Roads in the city, Sheffield's largest bus operator had signed the agreement with the then named SYPTE back in May 2007. First then pledge to invest £10 million in new vehicles, increased cctv use on existing vehicles and improved driver training. They also pledged to inform SYPTE of any alterations it planned to make to the network in the areas covered by the QBP. In return, SYPTE invested £4.4 million in 2006/7 and £2.5 million in 2007/8.

First claim that it is withdrawing from the QBP following SYITA's non-delivery on some of its pledges, through Sheffield City Council; specifically that SCC said they would not reduce bus priority measures at key locations along Hillsborough Road and the Wicker areas of the city and yet they have decided to do so. They also claim that SCC is still not properly enforcing many of the existing bus priority measures - specifically those along Glossop Road, which should be camera-fitted but are not.

They claim they first raised these criticisms with SYITA and SCC as early as last September and that nothing has been done.

The city council's ruling LibDem group said that it will refuse to accept the termination of the agreement, citing First's decision to pull out as a means to having not to pay compensation for service alterations it planned to make. Quite what SCC hope to achieve by simply denying First's departure from the QBP is anyone's guess. Could this simply be ineffective action by a local authority, effectively sticking its head in the sand as it knows it is impotent to act as it would like to?

First South Yorkshire were one of the first large operators to show an interest to be involved in a similar QBP being drawn-up in Doncaster. We suspect quite strongly that it will simply not happen here unless both sides agree much stronger terms. (GL)